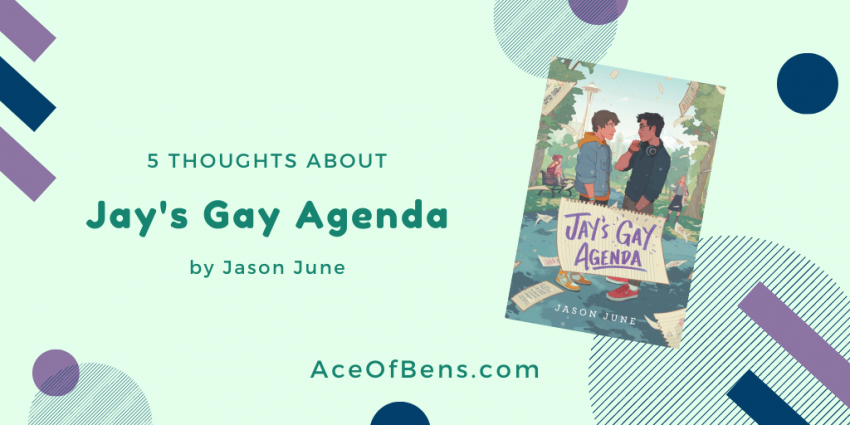 Thank you to the publisher for sending me a copy of JAY’S GAY AGENDA in exchange for an honest review!

1. So many of these characters are so easy to fall in love with

They all have their little quirks like Jay having the most random statistics memorized and having creative ways to avoid curse words, Albert’s robot building, Lu’s journalistic approach to life, and Max’s sass and style. I quickly fell for all of these characters and wanted to see all of them get their happy endings. On the way to that you get to watch them come of age in ways that are sometimes hilarious, sometimes

2. I really appreciate the focus on community in the story

I think most small-town queer people dream of moving to the city, or at least somewhere else, where they can escape the person they were expected to be growing up and find their people. So to see Jay get to do that in his last year of high school is so! great! Of course, he’s a horny teenage boy, so his initial focus is finding cute boys to kiss (understandable). Then on his first day he starts meeting other queer students that make him realize that this is also an opportunity to be a part of a community, that being queer is about more than just sex. Granted, that’s a significant part of it for a lot of people! But it can also be about gender and culture and found family and so many other things, and I think Jason June does a good job highlighting that.

3. In a way, it felt like everything wrapped up too cleanly for a messy book? [Spoiler, highlight text to view]

I understand why Jay had to go on an apology tour, but why did it seem like he didn’t get all the proper apologies he deserved. Like when Max apologizes, Jay says there’s no need? Kid, yes there is! I’m mad that it focuses on Jay being sorry for not being there for Lu as much as he should have and lying to her, but not on Lu lashing out and being weird? I just think they were both in the wrong and should have both apologized.

I’m not sure it worked for me. On one hand I’m like, “Ben, it’s a romcom! Let everyone’s dreams come true!” But then I’m like, “Okay, but everything else was messy, so why can’t there be a little something that’s not totally perfect?” I don’t know. It’s not a big turn-off for me, but.

4. If you’re sensitive to infidelity narratives, this might not be the book for you

Jay gets involved with two different guys which bloom into two very different relationships, and although he doesn’t officially enter a relationship with either of them, he doesn’t tell either about the other. This naturally leads to miscommunication. Some of it is because of some bad guidance from a friend, so it’s peak teenage “I haven’t learned how to communicate yet and oops, now I’m realizing I screwed up” messiness. I understood what the plot was trying to do, and I enjoyed reading about it, but it’s certainly not for everyone. Jay isn’t trying to hurt anyone’s feelings or gain some sort of power over anyone, though. Eventually, he realizes what he did wrong and tries to fix it. So it shows that people mess up, especially when they’re new to something, and sometimes two people just need to sit down and talk about what they want out of a relationship.

A happy, upbeat vibe to it. Hilarious characters. Very sex-positive. And very accepting and affirming of these characters as people. I think I’ve already talked about the first three things there, but let me mention that I think there’s only one character that makes any sort of queerphobic comments to/around Jay? And he’s only in the first part of the story. So queerphobia is a thing in this world, of course, because it’s contemporary fiction, but it’s not in any way the main plot. So if you’re looking for a low-stakes queer romcom to chill with this June (or any of the other 11 months), JAY’S GAY AGENDA is a good one to pick up.