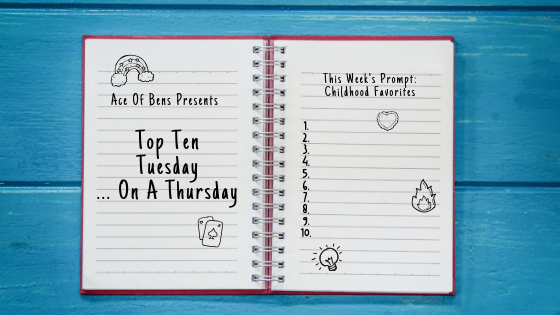 Hi, friends! I’ve decided to start doing Top Ten Tuesdays. Everyone else has so much fun doing these posts, and the prompts are great because they get you talking about so many different topics. Plus, it takes some of the pressure off of me to come up with a post idea! The reason I’m doing these posts on Thursdays instead of Tuesdays (as the name suggests I do), is because I post book reviews each Tuesday. I really considered changing my post routine for this weekly prompt. But since books typically release on Tuesdays, I ultimately decided to keep Tuesdays for reviews.

This week’s prompt is Childhood Favorites! There are quite a few ways to define “childhood”, so for the purposes of this post, I’m going to be listing ten books I remember being introduced to and love from age 12 or younger. This should be an interesting mix of picture books and chapter books!

Of all the picture books on this list, this is my #1 childhood favorite. I definitely read this book hundreds of times as a kid, or had my parents read it to me. But I also definitely had it memorized at some point. And then I remember reading it to my brother when he was a toddler/kindergartener and I just have lots of memories, but don’t we all?

2. The Junie B. Jones series by Barbara Parks

I remember getting a box set of these for Christmas one year and I was like ?? Who the heckie is this? But then my mom started reading them to me before bed every night and they quickly became my favorite books. I collected those suckers like they were

This is another I definitely read a hundred times, just not multiple hundreds like Chicka Chicka Boom Boom. Thinking back on it, the illustrations stick out to me a lot more than the story. I can definitely remember what happens! But I think I’ve just always been a lover of cold colors.

4. If You Give a Mouse a Cookie by Laura Joffe Numeroff, illustrated by Felicia Bond

These books were the BEST! I vaguely remember losing my shit (as much as a child can lose their shit) when I found out there were other books besides just If You Give a Mouse a Cookie. Also, in third grade, I wrote my own version called If You Give a Cat an Ice Cream Sandwich and I probably still have it around somewhere.

5. The Hunger Games by Suzanne Collins

We’re all obsessing over these books again, but this trilogy was my introduction to Young Adult literature. I loved the first book as a sixth grader and went through middle school and

I feel like this book is the root of my linguistic obsessions. I barely remember anything about it other than this kid picks up a pen one day and declares, “This is a frindle!” then it catches on? And everyone in his class eventually starts calling it a frindle. And in the epilogue, his old elementary school teacher sends him a dictionary when he’s an adult and she’s highlighted the entry that defines “frindle” as a pen, and so I’m like, “If he can just rename a gosh darn pen, then I can do stuff like that too, what?!”

7. Bartholomew and the Ooblek by Dr. Seuss

I swear I don’t remember anything about this book other than the fact that I had to have checked it out literally 20 times from my elementary school’s library. I think I was also obsessed with the black and white illustrations in which only the ooblek had color.

8. The Cat Ate My Gymsuit by Paula Danzinger

This was a story I didn’t relate to at all at the age I read it. GYMSUIT follows a fat girl who’s totally uncomfortable with her body to the point that she risks failing gym class because she just can’t participate. But I could relate to the overall lack of confidence and trying to find your voice. I was such an axious insecure child and I hated that about myself and… well, that’s for another post.

I read this story like three times back when I still reread books because I was too young to buy new ones and my family didn’t go to the library because we were procrastinators. But I really just loved the ending of this book because Miri isn’t the one to end up with the prince, and it just feels right! Shannon Hale is such a great writer and I should read more from her.

I’m pretty sure I still own a copy of all of these books, but I am going to donate them as soon as my library starts accepting again. I thought these books were HILARIOUS when I was in elementary school. I just ate these books up.

What were some of your childhood favorites? Do we share any faves?

2 thoughts on “Top Ten Tuesday … On A Thursday – Childhood Favorites”