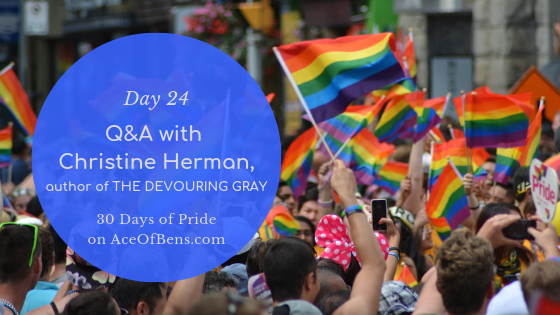 Welcome back to 30 Days of Pride on Ace Of Bens! Today, Christine Lynn Herman, debut author of The Devouring Gray is here to talk about book, pride month, and disaster bi representation (which is very, very important)!

BEN ACE: Hi, Christine! Welcome to 30 Days of Pride, and thank you so much for participating! To start off this Q&A, why don’t you talk a bit about some of your favorite media (TV, movie, books, music, etc.) with queer representation?

CHRISTINE HERMAN: Hi Ben! I’m so happy to be here. There are so many different examples of media with positive and nuanced queer representation in the world today, but here are just a few of my favorites, broken down by category:

TV Show: Steven Universe!!!! It’s a must-watch on every level, made all the more better by how gloriously queer it all is. I wish this show had existed when I was growing up—I know it’s changing lives.

Music: Hayley Kiyoko, oh my gosh. EXPECTATIONS is a brilliant album that I had on repeat for most of last year.

Books: WILDER GIRLS by Rory Power—this f/f horror spec YA blew my mind when I first read it over a year ago, and I’m so excited for it to finally be out in the world in a couple weeks (!!) (July 9! Go buy it!)

OTHER WORDS FOR SMOKE by Sarah Maria Griffin—three generations of Irish women collide, connect, and grapple with intense otherworldly forces and their own internal trauma. The way Sarah talks about queerness and family is so beautiful and poignant, it absolutely destroyed me.

CH: I love to spend Pride Month making an extra effort to revisit all my favorite queer media, and to consume new queer media for the first time! I have a list of books to read that I’m very excited about, which all come highly recommended by queer friends.

BA: How about your characters? It seems they have a lot going on in the book unrelated to queerness and pride, but when they need a break in June, how do they celebrate Pride Month?

CH: Violet and Isaac would be all about Pride Month in completely different ways. Violet would be nervous about all the crowds at a pride parade and have to be talked into going… then wind up having a great time and riding on a float and perfecting an amazing make-up look. And Isaac would probably host some kind of queer book club for the month, where all the LGBTQIA+ kids in Four Paths could argue about their favorite queer novels together.

Juniper and Augusta are older and both more reserved with their emotions, so they would pretend not to care about Pride Month and then secretly follow the parades and celebrations on social media and get emotional about it.

BA: One of the most talked about aspects of the queer representation in The Devouring Gray is that there are multiple bi characters. Did you set out to make this part of your cast, or did it happen without you necessarily meaning to?

CH: It was all very organic, honestly. I did not set out to have such a queer cast, but as the story developed, the characters’ identities became clear to me, and I realized that it was actually a very important part of the story for me. THE DEVOURING GRAY evolved subconsciously into a book that I’d always wanted as a teen: one where characters got to be queer and also go on a supernatural adventure.

BA: You’ve called the main cast the “disaster bi wood kids” a few times on social media, so would you mind giving us some insight on what makes them such Disaster Bis™?

CH: Oh my goodness, they are SUCH DISASTER BIS. Isaac is a disaster bi because he feels everything all the time and has no idea how to express it, and Violet is a disaster bi because she thinks she wants and needs the opposite of everything she actually wants and needs. Both of them care so deeply for the people around them, but they are still working on figuring out healthy ways to express that. I use the term “disaster bi” so frequently and so lovingly because I was a teenager with a lot of emotional turmoil etc. and I think that it’s good to embrace and normalize the strangeness of being a teen, especially a queer teen. It’s an important part of growing up.

BA: Since there are several bi characters in this story and there is no one way to be bi, I assume each character experiences queerness in a different way. Which character would you say is written the closest to your own experience? Is this the same character you relate to the most in other aspects of life?

CH: In my opinion, the four bi characters in the main cast definitely do experience their queerness differently. It was important for me to show that there are, as you say, a variety of experiences for bi people, and no one right way to embody that identity. I would say that Isaac is written the closest to my own experiences, but that I actually relate the most to Violet in terms of other aspects of life.

CH: It took me a long time to be able to speak so publicly about my identity, but I’ve always been queer regardless of how many other people knew about it. Pride isn’t just about being loud and open—it’s about internal strength and love for yourself. Not everyone is in a position where it is safe to be open about their identity. Not everyone is ready to be open about their identity. And that’s okay! You are still loved, you are still welcome, and you are still part of this community. 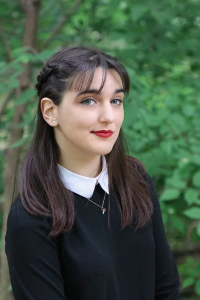 Born in New York City but raised in Japan and Hong Kong, Christine Lynn Herman subscribes to the firm philosophy that home is where her books are. She returned to the United States to study at the University of Rochester, where she received the Dean’s Prize in fiction and an Honors English degree. Currently, Christine and her books reside in a Brooklyn apartment, along with her partner, many plants, and their extremely spoiled cat.​

Her debut YA novel, THE DEVOURING GRAY, released from Disney-Hyperion on April 2, 2019, with a sequel to come the following year. She is represented by Kelly Sonnack of the Andrea Brown Literary Agency, and can be found on Twitter and Instagram @christineexists or at christinelynnherman.com.