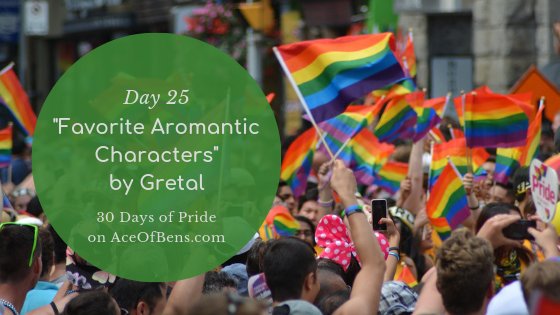 Welcome back to 30 Days of Pride on Ace Of Bens! Today, I have another post about a-spec rep to show you all! If you’re looking for more examples of aromantic representation in YA literature, look no further! Gretal is here today with a list of aromantic characters that she loves and that you’ll probably love, too.

For 30 Days of Pride, I wanted to make a list of my favorite aromantic characters, but the thing is, there aren’t all that many aro characters out there. The amount of characters gets even smaller when we look only at traditionally published books from publishers that are likely to be found in libraries, which is how I, and many teens, read most books. And then there’s the additional issue that not every aromantic character is going to be my favorite. That isn’t how it works. Still, I feel very lucky in the year 2019 to have enough characters that I can choose favorites. (Let’s be real though, the bar is truly on the ground. It’s hard not to feel elated when the fact that we exist is acknowledged.)

1. Emerald from Mask of Shadows and Ruin of Stars by Linsey Miller

I read Ruin of Stars by Linsey Miller right when I was really questioning. Even though she’s a side character, that representation, and Emerald’s bad ass self, was so affirming to read. She also isn’t asexual which is super nice to find because so frequently people will conflate the two, but in these books it was so clear that romantic and sexual attraction are different things. There’s a quote from Ruin of Stars that’s part of a wonderful longer passage that says “Emerald was Emerald out of love.” And it’s true, and I love her.

2. Clover Martinez from The Last 8 by Laura Pohl

I love Clover so much. She’s this depressed aromantic bisexual Latina pilot just trying to survive after it seems that everyone else on earth has been wiped out by an alien invasion. I would fight for her (and frankly have because y’all! Not every aromantic character is also ace! I don’t even want to get in the amount of times I’ve seen people just call her ace, leaving the aromantic part entirely. Never mind the fact that she isn’t asexual; she’s bisexual and she’s aromantic). But yeah I love Clover. She’s just trying her best in a truly terrible situation. I can’t wait to read The Final 7 and see where she goes.

Oh Reese. She really doesn’t care what other people think, and I love her for that. She’s aromantic and asexual, and those words are used on the page, along with allocishet. Which just, the way that made me feel was incredible. Not only does this book acknowledge that aromantic people exist, but it allows an aroace girl to be a main character.

4. Nathaniel from Tarnished are the Stars by Rosiee Thor

This book isn’t out yet, so I’ll keep it short, but I love Nathaniel. He’s soft and deserves the world and I want to just protect him from everything evil. He finds the words aromantic and asexual over the course of the story and I’m just so happy for him I love him. We also hardly get to see aromantic and/or asexual guys, so that was incredibly refreshing.

5. Keladry of Mindelan from Protector of the Small by Tamora Pierce

To be honest, I really went back and forth about including Kel. She’s only word of god aromantic, but because Kel and her aromanticism means a lot to me, I thought it was worth a mention. Throughout the quartet we see Kel developing what she thinks are crushes on various guys, and she does get into a relationship of sorts, and that is part of why aromantic Kel means so much to me. Amatonormativity is really something, and we do get into relationships because of it (and then of course there’s also there are aro and arospec people who want relationships or get into them even though they experience little to no romantic attraction).

All of Kel’s “crushes” end rather quickly. She views herself as fickle, but I found her a very relatable aromantic. I’ve decided I had crushes on guys before (heteronormativity and amatonormativity really work together) and then come back to it and questioned why I ever was into them/thought I was into them. Of course because she’s only word of god aromantic, this isn’t quite unpacked in the text like I wish it were. Kel, bad ass lady knight, protector of the small, and aromantic, still means the world to me.

Gretal is a college student and blogger. She can be found on the internet frequently yelling about aromanticism and her need for strong friendships, especially of the m/f variety.