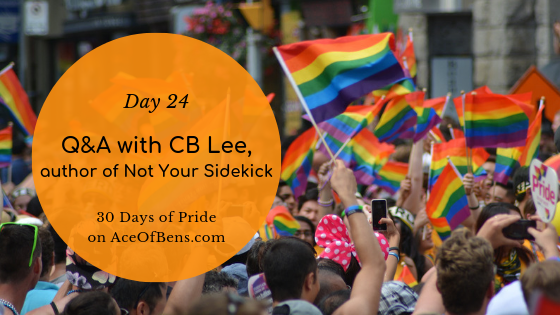 Welcome back to 30 Days of Pride on Ace Of Bens! Today, I have a great interview with C.B. Lee, author of Not Your Sidekick, to share with all of you! A lot of this interview focuses on a-spec representation, which is strong in certain parts of media, but still widely lacking. I hope you all enjoy this interview from me and Kitty @ Jellyfable!

BEN ACE: Hi, CB! Welcome to 30 Days of Pride, and thank you so much for participating! To start off this Q&A, why don’t you talk a bit about some of your favorite media (TV, movie, books, music, etc.) with queer representation?

CB Lee: Hello! Thanks so much for having me. I love talking about queer media! One of my favorite movies is Saving Face, which is a romantic comedy with between two different Chinese-American women in New York, and examines different cultural expectations around career and success and also a really sweet developing romantic relationship and great conversations about family dynamics. As far as books, I’m so excited that there are so many more new books for the LGBTQ+ community! One of my newest favorite reads is I Wish You All The Best by Mason Deaver, and it’s such a lovely and wonderful story about a non-binary teen, Ben, who’s working through anxiety and depression as they adjust to a new school after a lot of changes. I thought it was such a great, thoughtful read, and I’m so glad it exists.

Another one of my favorite pieces of media is The Bright Sessions, a podcast about a group of “atypicals,” or superpowered people, who are in therapy, working through their issues as they uncover a larger secret and also get closer together. There are so many wonderful queer characters and so many beautiful relationships blossoming and growing together, it’s one of my favorite found family dynamics ever.

CBL: For myself, I think celebrating with friends and attending LGBTQ+ events and supporting small business owners and creators is how I celebrate. I’ve marched in the parade once for the experience with the LA LGBT Center last year, and it was really fun to get to see so many people celebrating with music and the party! It was very overwhelming, though; I’m not great with crowds, and while I love and appreciated the energy, I really like seeing a lot of different kind of events pop up as well, including virtual chats and organized events such as your series! I’m doing a few events at bookstores as well that I’m looking forward to! I also love seeing all the fantastic art and creative items from creators in the community.

KITTY @ JELLYFABLE: Can you tell us a bit about the a-spec representation in your upcoming book, Not Your Backup?

CBL: Sure! The Sidekick Squad series follows a group of queer teens as they fight back against a corrupt government superhero agency. Emma’s journey in Not Your Backup revolves around her role in the growing Resistance effort, and her path towards becoming a hero in her own right. At the end of Not Your Villain, the last book in the series, we see Bells and Emma discuss their feelings for each other, as well as Emma’s own questioning of her aromantic and asexual identity. As Emma navigates her growing relationship with Bells and learns more about where she is on the asexual and aromantic spectrums, she grows more confident in who she is and what kind of relationship she wants.

KJ: At what point in the planning and writing of the Sidekick Squad series did you realize you were going to write an a-spec character? What influenced this decision?

CBL: Emma was always going to be a-spec; I wanted to show multiple queer teens who have different identities, especially as these teens exist in real life. When we first meet her through Jess’ story, we see her as Jess sees her, headstrong and courageous, always ready to fight. Emma’s also quick to comment on how cute someone can be. In Not Your Backup, Emma dates Carlos, and we learn a little more about her dating history. She’s been trying to figure out what works for her; she’s quite extroverted and can come off as super flirty, but it’s all part of how she’s projecting what she thinks is expected of her and how she’s navigating high school and dating. She learns more about who she is and grows more confident in claiming that identity for herself in Not Your Backup; as with all the characters in the Sidekick Squad, I wanted to share a story where an asexual and a-spec teen got to be the hero.

KJ: In the second book, Not Your Villain, we saw Emma questioning both aromantic and asexual identities. Do you think there are different challenges to writing a questioning character instead of one who was already confident in their identity?

KJ: How did you identify Emma’s orientation on the page? Did you use the terms “aromantic” and “asexual” in the text and how did you come to that decision?

CBL: Emma identifies as asexual on the page. As part of her journey, she discusses what it means to be aromantic and how she feels about where she is on that spectrum with other characters, and by the end of the book Emma feels confident about being a-spec; I wanted to leave this part open as Emma, like many people, knows she’s on the spectrum. This was important to me to have the terms on the page, so readers could use that framework, but also see that it is normal and valid to be on the aromantic spectrum and not have it fully defined as well.

KJ: In writing an a-spec character, did you do research and consult sensitivity readers or did you rely on your prior knowledge or experiences?

CBL: Both. I met with and had multiple readers, asexual, aromantic and on the aromantic spectrum, who read the work and gave me really important feedback and notes. It was incredibly helpful, as no one experience is universal, least of all my own. Much of Emma’s own struggle with dating comes from my own experience and me learning more about being demiromantic. As Emma finds in the story—that there’s no right or wrong way to be asexual or aromantic. There are multiple ace and aro characters in the story, and different perspectives and experiences are shown, and Emma’s story is just one aspect of the experience.

KJ: What projects are you planning to work on next and do you think we see more queer characters in your future stories?

CBL: My next novel will be the last in the Sidekick Squad series, Abby’s book, the title of which will be revealed at the end of Not Your Backup. All the queer characters introduced in the Sidekick Squad will return in the series for sure! As far as my future works, I have a short story in the upcoming All Out Now anthology, out in 2020, and I hope to have more characters in my works to come.

CBL: I think everyone’s journey is different, and no matter where you are on that journey, you’re valid. Pride to me isn’t about having to be out or attending parades, to me it’s about understanding that you’re not alone, that you and your identity are true and valid. For many people it isn’t safe to be out where they are or aren’t comfortable with it, and I hope you know that you too are not alone. I don’t think there’s a right or wrong way or a certain number of steps and actions you need to take to be queer. Whether you’re questioning and learning to be more comfortable with who you are or whether you’re coming out to one, ten, many people, your decision is yours alone and it’s the best thing for you and your journey. How you approach that, however you decide to live your life, whatever your circumstances are, you deserve all the joy and happiness in the world.

CB Lee is a bisexual Chinese-Vietnamese American writer whose novels include the Sidekick Squad series, a young adult science fiction adventure that follow queer teens who take on a corrupt government superhero agency, and also the fantasy Seven Tears At High Tide. Lee’s work has been featured in Teen Vogue, Wired Magazine, and Hypable.

Not Your Sidekick was a 2017 Lambda Literary Awards Finalist in YA/Children’s Fiction and a 2017 Bisexual Book Awards Finalist in Speculative Fiction. Seven Tears at High Tide was the recipient of a Rainbow Award for Best Bisexual Fantasy Romance and also a finalist for the 2016 Bisexual Book Awards in the YA and Specu-lative Fiction categories.Lee has been featured at literary events such as YALLWEST, Pasadena Litfest and Lambda Litfest’s Celebrating the Asian American LGBTQ+ Experience at the Chinese American Museum, as well as a guest at popular panels and discussions such as DragonCon’s “LGBTQIA in YA” , “BiScifi: Queer Heroes in Science Fiction and More”, “The Craft of Dystopia”, “Magic and Worldbuilding,”, WonderCon’s “Sisterhood of the Self-Sufficient,”Emerald City Comic Con’s “Diversity in Publishing,” and San Diego Comic Con’s “Super Asian America” and“Into the Fanzone!”

Lee lives in Los Angeles and when not writing, enjoys hiking, rock climbing and other outdoor pursuits. You can connect with her on Twitter and Instagram.