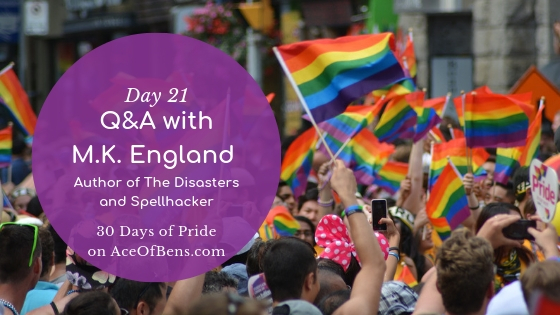 Welcome back to 30 Days of Pride on Ace Of Bens! Today, I’d like to welcome M.K. England, the author of The Disasters (2018) and the upcoming Spellhacker (2020). They’re here to talk about queer rep in sci-fi and in their books, celebrating pride month, and a whole lot more. I’m so excited to have them on my blog, and I hope you all enjoy this interview as much as I did.

BEN ACE: Hi, M.K.! Welcome to 30 Days of Pride, and thank you so much for participating! To start off this Q&A, why don’t you talk a bit about some of your favorite media (TV, movie, books, music, etc.) with queer representation?

M.K. ENGLAND: I’m definitely more of a TV person than a movie person. I’m so heartbroken over the cancellation of the reboot of One Day at a Time on Netflix! So worth watching though. Loved it. Good old Brooklyn 99 will always be a favorite. So much to love. Also, I wouldn’t say the queer rep is good necessarily, but I can not look away from The Magicians TV show and my son Eliot. Why can’t I stop?

On the book side of things, I think my favorites are both YA: Girls Made of Snow and Glass by Melissa Bashardoust and Aristotle and Dante Discover the Secrets of the Universe by Benjamin Alire Sáenz. I also wanna give a shout out to a recent adult romance, though: I love the whole Reluctant Royals series by Alyssa Cole, but book 3, A Prince on Paper, had some major LGBTQ+ content that was such a beautiful surprise to find in a mainstream romance. Loved it.

BA: Part of the reason I started this series is because I know June feels like a month-long holiday for many people in the queer community. How do you celebrate Pride Month? Are you doing anything pride-themed at your library?

MKE: I rarely get to do much on a personal level because June is the start of the summer reading program in the public library world. That means constant chaos and collapsing on my couch at the end of the day due to a drained social energy tank. Busiest month of the year! But, I always make sure to do something at my library. I’ll usually have a display up all month long featuring queer books, and sometimes with an activity that’s all inclusive. Last year it was “Make your own pride flag” which could include anything you’re proud of, and the year before it was a beautiful community board where people could up a little dot that reflected their gender identity. This year, it’ll be heart maps. It always means a lot to me, to have something available. We also read LGBTQ+ books for book club throughout the year, and sometimes have themed events.

BA: As someone with the term “geek” in their social media brand, I’m sure you spend a ton of time watching, reading, and listening to science fiction media. So where do you see queer rep going in the sci-fi genre, in books or otherwise?

MKE: I hope we’ll see it go the route of The Disasters, the Mass Effect video games series, etc. where it’s a seamless part of the world and deeply intersectional. Sci-fi is the perfect setting for demonstrating any kind of social change. Why not imagine a future where everyone is accepted and welcomed?

BA: When you began writing The Disasters and Spellhacker, did you set out to write a story with queer teens at the forefront or did the characters’ identities just appear naturally as you outlined/drafted them?

MKE: I always knew both Nax and Diz were going to be queer, but the characters around them largely appear as they will. I like to try to include a variety of intersection queerness, but I never force an identity if it feels off for the character somehow. For SPELLHACKER, though, it was really important to me that I include a non-binary character. I finally figured out labels for my own gender identity between when I first drafted THE DISASTERS (2014) and when I started working on SPELLHACKER (2017), so it meant a lot to me to have a place to express that. In general, every book I ever write will have multiple queer characters.

BA: I’ve noticed that information about Spellhacker is pretty scarce (which is understandable since it’s still a while away from releasing and The Disasters is so hard not to talk about!), but what can you tell us about the queer representation in your upcoming novel?

MKE: Haha, yes, it’s not out until January 21st, 2020, but I hope to have more information out there very soon! The main character, Diz, is a queer girl, and her love interest is a non-binary badass named Remi who she’s known since childhood. Their friendship is complicated and hard, much like the world they live in, but they’re fighters. I can’t remember if this is shown on the page or not because it may have gotten accidentally sliced out when I cut an entire section, but Jaesin, another member of the core crew, is a bi guy. There’s also a lot of background queerness, including my personal favorites, a bakery owner, and an old married couple. You’ll know them when you see them. 🙂

BA: Now let’s talk about the lovely characters in The Disasters. How do you imagine the main crew—more specifically Nax, Rion, and Zee—celebrating Pride Month in their version of the world?

MKE: What a fun question! Nax and Rion, being the boisterous troublemakers that they are, would probably go find the biggest parade or party in the ‘verse, have a blast, and do something ridiculous. Zee is a bit on the quieter, more reserved side, but I could definitely see her and Case tagging along and finding the nerd corner to hang out and make friends, with Asra as the more outgoing conversation starter. I also love to imagine the Swift Kick decked out in rainbow decor for the month, maybe with a big rainbow temporary decal on the outside. How fun would that be?

MKE: Whoever you are, wherever you are, please know that you have a worldwide queer community who’s thinking about you, hoping for you, and who can’t wait to meet you. Take your time, be safe, and know we’re here when you’re ready. Also, go get yourself a colorful dessert, take a photo of it, declare inside your own head that it’s your pride month celebration cupcake or whatever, then eat that thing with all the joy and love and pride you wish you could express openly. It’s your own little private celebration. You deserve it. I love you. 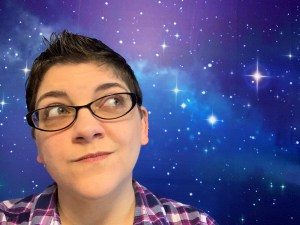 M.K. England is an author and YA librarian who grew up on the Space Coast of Florida and now calls the mountains of Virginia home. When they’re not writing or librarianing, MK can be found drowning in fandom, rolling dice at the gaming table, climbing on things in the woods, feeding their video game addiction, or talking way too much about space and science literacy. They love Star Wars with a desperate, heedless passion. It’s best if you never speak of Sherlock Holmes in their presence. You’ll regret it.