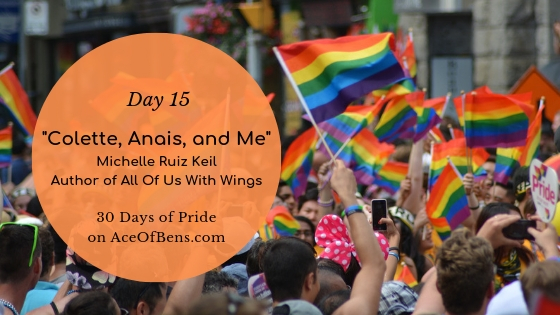 Welcome back to 30 Days of Pride on Ace Of Bens! Today, Michelle Ruiz Keil is here with a beautiful piece about self-discovery and finding pride in her identity. If you enjoy this, because sure to check out her debut YA novel, All Of Us With Wings releasing on June 18th.

As a kid in the 80’s, I’d read all the books for teens in my suburban California library by the time I finished middle school. I moved on to classics and fantasy, mostly borrowed from the floor-to-ceiling bookshelves that lined the hallway of my best friend’s small stucco house. I’m pretty sure that’s where I found Colette and her dead-smart somewhat sadistic teen heroine, Claudine, a turn of the century mean girl with a wicked crush on her teacher, Aimee. I remember the shock I felt reading this part of the story—the shock and the desire.

I packed it carefully away and went looking for more. After all, I was known as a voracious reader and my penchant for unreadable classics was well-known at my house and the public library. Those dented volumes with their flaked-off gilding and cracked covers needed no plain brown paper wrappers to hide them. Their genius was to hide in plain sight.

After inhaling the Claudine books, I moved from Colette’s diary-structured novels to Anaïs Nin’s actual childhood diaries, which were mostly tame but had a reputation for scandal in the later volumes. By the end of sophomore year, I’d fallen in with a group of older punks. I was the innocent of the group and the baby. They all loved to shock me just to watch me blush. Two of the boys were queer and hinted about it outrageously in the privacy of our undesirable staircase lunch spot. I was embarrassed, yes. But also—I was comforted. Their jokes whispered to something I couldn’t quite name, wasn’t ready to own.

One of the senior girls, also bookish but much more sophisticated than I was, became a mentor to me. She was away at college when a package from her arrived on my sixteenth birthday—a gilded red-covered book, Delta of Venus, a collection of erotica by Anaïs Nin. Delta of Venus was formative. Queer people wove in and out the strange tales as a matter of course. Though many of the stories were not erotic to me, all were fascinating, showing me a gorgeous, dangerous, ugly, permissive, creative, pleasure-filled world. I began to dream of crumbling apartments in beautiful cities where I would make my living as an artists’ model and have fabulous affairs with anyone who struck my fancy. If I was very brave, I’d substitute the default tall dark painter with a plump diaphanous courtesan or a severe tight-breeched bluestocking intellectual.

Still, this was the eighties. I knew some of my classmates were gay but none of them were out. Even in liberal California, this was the way. Gay girls were hissed at as “dykes” and “lesbos”. Gay boys could not be whispered about without the threat of violence. So I stayed silent, not even realizing there was a word for the way I’d always felt about certain girls and certain boys. I stayed silent and I read until finally, I found a life where I could fully be myself.

While that life has often been less glamorous than I’d imagined (artists’ modeling is very hard work, not to mention office jobs and parenting), I found a space where I could be myself and write the kinds of stories I wanted to see in the world. Every time I sat down to write the story that would become my debut novel All of Us With Wings, my teen bookworm self was by my side with her cute asymmetrical haircut and cut up B-52’s concert tee, not even blushing as I wrote my characters a world where identity and sexuality are sacred, a unique personal magic people are entitled to define for themselves. 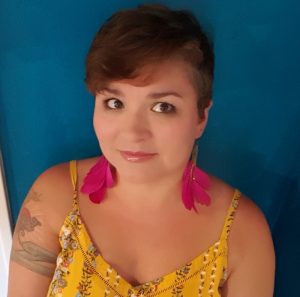 Michelle Ruiz Keil is a Latinx novelist and playwright with an eye for the enchanted and a way with animals. She teaches writing with a focus on fairytale, divination, and archetype and curates All Kinds of Fur: A Fairytale Reading Series and Salon in Portland, Oregon. Her short fiction can be found at Cosmonauts Avenue and in the forthcoming anthology Color Outside The Lines. Her debut novel All of Us With Wings, a magic-infused coming of age story set in post-punk San Francisco, releases June 18th from Soho Teen.