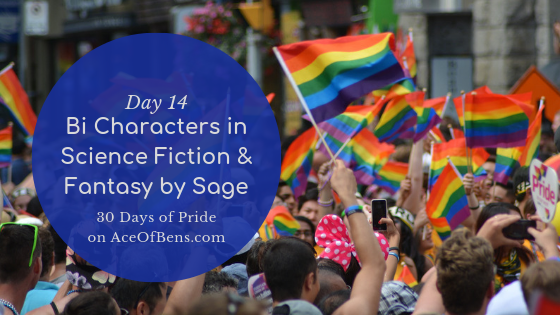 Welcome back to 30 Days of Pride on Ace Of Bens! Today, Sage is here to talk about bisexual characters and bi rep in science fiction and fantasy. Queer characters in SFF is something we don’t talk or think about nearly enough, and I’m glad he’s giving us a list of awesome bi characters. Happy 20BiTeen to you and your TBR list!

Representation is an incredibly important part of our culture, especially rep that doesn’t fall prey to gross stereotypes or characterizations. I’m bisexual, so bi rep is something I’m very passionate about. There is lots of questionable bisexual representation, especially in the early days of LGBT+ rep becoming mainstream. So I’m breaking down some good bi rep in science fiction and fantasy!

Rhy Maresh  (A Darker Shade of Magic by V.E. Schwab)

Sometimes I sit down and go, “Wow, Rhy Maresh is really out there being Like That all the time,” and that is an immense amount of comfort to me. Both Rhy and other narrators comment on his attraction and past relationships with people of various genders. And it’s never treated as anything other than normal.

In my review for The Collapsing Empire, I spent a good 60 words just talking about how much I love Kiva, and even now almost an entire year later I still feel very very strongly about her. I really love that she’s a character with a high station, a person in a position of power, that isn’t afraid to be open about her sexuality.

I have more love for Adam Parrish than should be possible for one human body to contain, but here I remain. My adoration for Adam stems from a lot of things, but his bisexuality is definitely a part of that. I just really appreciate how different he is from so many bi stereotypes.

Inkmistress isn’t quite as popular as it’s companion Of Fire & Stars but I enjoyed it a lot, and Asra was a big part of that. She’s very different from a lot of heroines, and I really liked watching her journey. One of the things I really appreciate about the rep in this book is Asra’s endgame relationship ends up being with a man. Pretty much all bisexual characters end up in same-sex relationships which really isn’t the case in real life.

When I decided to do this list, I knew I wanted to include some lesser-known bisexual characters, but I couldn’t leave out all of the iconic ones. Thus we have Jesper. Six of Crows is consistently commended for its rep, and I think Jesper is a good example of why that is. He doesn’t play into a lot of stereotypes, aside from the idea that us bi folks have a bad taste in fashion (Lime green suits?? Really?) and he brings an extra spark of life to the gang.

Jane is the one character on this list that I don’t see a problem with the fact that she never outright states her sexuality since Dread Nation is set during the Reconstruction Era (approx 1865 – 1877) and the term bisexual didn’t even come into existence until 1892. There’s a debate in here somewhere about applying modern labels to historical figures. Instead, I want to focus on the fact that we have a character from the mid-1800s openly admitting to being attracted to men and women. Historical fiction is greatly lacking in LGBT+ rep, and Jane is an amazing example of just how right it feels to acknowledge that even people from past centuries were queer. Plus, she’s super fucking badass.

Magnus is undoubtedly one of the most iconic characters on this list. He’s also the only one I can distinctly remember stating his sexuality in canon. He’s very much not afraid of his sexuality, and I really appreciated how open he was about it.

Jessica Tran (Not Your Sidekick by C.B. Lee)

I haven’t finish Not Your Sidekick yet, but I love the world and more importantly, Jess. She’s an intensely relatable character, especially within her family dynamic and I’ve really liked being with her so far! And yes, I promise I will finish it soon.

Hi, I’m Sage! I’ve been a book blogger for about a year now, and I’m a demiromantic bisexual trans guy. I’m obsessed with milkshakes, science fiction, and aesthetically pleasing spreadsheets.