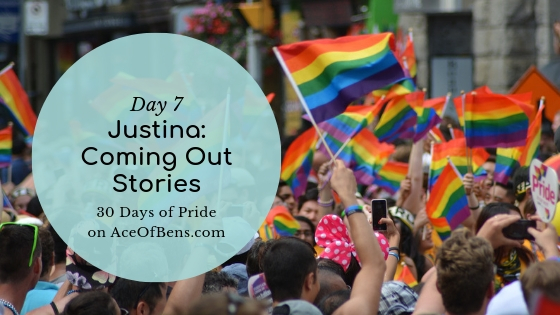 Welcome back to 30 Days of Pride. Today, Justina has a few stories about coming out to herself, her friends, and her family that she’s kind enough to share with us. Let’s celebrate pride month and coming out with her!

High school has truly been a life changing experience for me. Until 9th grade came around, I always liked boys. I hadn’t even thought about my sexuality. I guess I just always thought I was straight. All that changed as I entered high school. It was like a flip had switched, I started looking at people differently. By that I mean, I stopped having crushes on boys and instead started having feelings for girls. It scared me so much at first. I was so confused as to why all of a sudden this was happening.

For six months, I questioned myself. That may not seem like a long time for some of you, but for me, it felt like forever. I needed to know who/what I was. I was constantly watching coming out stories on Youtube, Googling Am I Gay? quizzes, and thinking about how I felt for girls. Then, towards the end of March of 2016, I was sitting on my couch, and it hit me: I’m gay. I started crying right away, I was so happy to finally realize it. A few days later, one of my friends messaged me, telling me she’s bi. So, I came out to her, along with a few other friends, and it spread from there. I was then out at school, I didn’t care who knew.

Fast forward about a year, is when I came out to my mom. We were in the car driving back to her house. She started talking to me about sex and how I should tell her when I start having it so I can be put on birth control. I interrupted her with “Mom…about that…,” then I started crying, and she got very concerned. After a couple of seconds, I just told her that I’m gay. She was very supportive and didn’t even hesitate before she said that’s fine. Then, about a year later, my sister started dropping hints that she knew I’m gay. I didn’t actually come out to her, but she’s been super supportive anyway, and I’m grateful for that. Since LGBTQ+ people never stop coming out to people around us, I told a few co-workers and my band teacher, and everyone has been totally great about it. I can even make gay jokes around all them, which is how you can tell I’m comfortable around you.

Last, but not, least, I came out to my dad on May 16, 2019, and I’m writing this on May 26. I was scared to tell him because a few years ago, things happened that made me think it’d go badly. But, it went great, and this is the longest story of them all.

So, at school, I am a library aide for one class period during the day, and a couple of weeks ago, I made an LGBTQ+ book display. It is beautifully set up. On my high school’s Facebook page, they posted about it, so of course, I had to share it. My dad saw that I shared it right away and asked what all the letters meant so I told him, and he was like okay and we moved on from it.

Something about that hit me as I was sitting on the couch internally freaking out because I knew that night I was going to come out to him. So, about 15 minutes went by, and he went into bed, so I did too. But I still hadn’t told him. While in my room, I was calming myself down and telling myself, “If I go to his room now, I will tell him.” That’s exactly what I did.

I walked to his room, sat on the bed, started crying, and said, “I have something to tell you, but I’m scared.” He told me to go on, so I said: “I’m gay.” The couple seconds of silence that followed was torture before he said: “Okay, and?” I told him I had been scared because of the thing that happened a few years prior, and he explained that that had been a completely different situation and he’s grown since then. I was so overwhelmed with relief. I said thank you and laid my head on his side, and he put his arm around me, and we talked for a couple of minutes. My favorite part is when he told me if I ever grow out of it, that’s fine, and if I don’t, that’s fine, too. I know I won’t, so I told him I want him to be okay with it if I don’t. He said, “If I’m not, oh well. I can’t change you or how you feel.”

I’m so happy everything has gone so well so far, and I know everything will be okay from now on, whether or not people accept me. I am incredibly proud to be who I am, and no one can ever stop that.

Hello! I’m Justina Hallett, a lesbian YA book blogger. I love reading, blasting music in my headphones, and spending time with friends. I take pride in anything I create, and I love to make people smile and laugh. I love life.