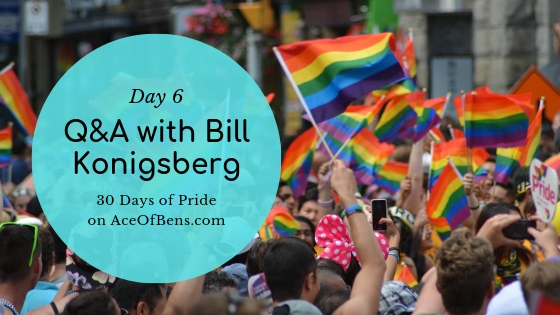 Welcome back to 30 Days of Pride! Bill Konigsberg — author of The Music of What Happens and Openly Straight among many other titles — is here for a Q&A in which he talks about celebrating pride month, being queer in sports, and more!

BEN ACE: Hi, Bill! Welcome to 30 Days of Pride, and thank you so much for participating! To start off this Q&A, why don’t you talk a bit about some of your favorite media (TV, movie, books, music, etc.) with queer representation?

BILL KONIGSBERG: So many and I’m afraid I’ll leave some out! Here’s a by-no-means-complete list of some of my LGBTQIA+ faves:

Books: Tales of the City by Armistead Maupin, I Wish You All the Best by Mason Deaver, Ask the Passengers by A.S. King, Anything by Adam Silvera, Becky Albertalli, Benjamin Alire Saenz, Nina LaCour, Sara Farizan.

BK: I guess for me, every month is pride month. I worked so damn hard to get to the point where I love myself! Like all LGBTQIA+ people, I’ve battled so many negative forces aimed at bringing me down, aimed at making me feel less than. I’ve battled that for so long, and I am so grateful to those who came before me, who helped me win that battle. I feel a lot of pride about that, too. So I can’t possibly put all the pride I feel into a certain month! I used to march in parades, and I used to go to rallies. Nowadays, I feel like I’m on the other side of that. I live a life of pride on a daily basis, and that’s something I wish to model for young LGBTQIA+ people. That we don’t just exist, but we can thrive. Anywhere we want. For me, my prideful life takes place in the conservative suburb of Chandler, Arizona!

BA: Expanding from that question a bit, how would you describe your overall sense of pride? This can be in the queer community, in your work, in any aspect of your life.

BK: For me, a lot of my pride relates to the works I’ve created. I spent a lot of my early life downplaying my accomplishments and not really believing in my own essential goodness. I basically hated who I was most of my life, so I never really had much of a sense of pride, to be honest. But now, with the books I’ve written? They’ve helped me to really understand that I’ve had an impact. The books I’ve written have helped people feel good about themselves, helped them to see the beauty in who they are, as LGBTQIA+ people. That’s a way in which I have, in some small way at least, improved other people’s lives. I often say that at this point, it’s all gravy. Because I have been, for some other young people—and who knows how many? Two, two thousand? Twenty thousand?—the person I wished for when I was a kid. Someone who would show me that I was more than okay just as I was. That, to me, is something I feel unfettered pride about, and it can never be taken away from me.

BA: So I’ve heard that your latest novel, The Music of What Happens talks about a lot of difficult topics that your previous novels didn’t touch on as much, such as rape culture, mental illness, and toxic masculinity. How does the presence of these difficult situations play into the main characters’ senses of pride, queer pride or otherwise?

BK: Good question! The way I look at it is that these unpleasant facts of life mess with our sense of pride. I, personally, have dealt with all three. I was sexually assaulted as a young person. I have dealt with clinical depression most of my life. And I have taken in those societal messages about what it means to be a man, and how I don’t measure up to those markers. Each of them was an existentially deep blow to my self-esteem and self-worth. Each carried messages that there was something wrong with me.

But here’s the thing: those messages were lies! What a beautiful (and maddening) thing to learn, all these years later, that no, I wasn’t to blame for a grown man assaulting me when I was 14. That the fact that my brain chemistry is different than that of other people doesn’t make me a bad person. That the measure of a man isn’t whether or not he can hide his (very human) emotions. I feel pride today as a gay man because I have come to understand that these bullshit beliefs held me down for so long, and they no longer do. And that’s a gift I wish to share with my LGBTQIA+ children. (I do, by the way, think of young LGBTQIA+ people as my kids, by the way. Weird, I know). I don’t want them to have to go through the same crap I went through.

BA: You’ve said in interviews before that you often put a piece of yourself in the protagonist of each of your stories and that they often go through similar things you have. Is there any character arc in specific that you feel more connected to than the others?

BK: All of them are deep connections in some way, either metaphorically or otherwise. I am probably most like Rafe from Openly Straight in some ways, in terms of my own denseness about my own privilege. But I’m also Max from The Music of What Happens, with his struggle to understand his own masculinity in light of societal messages. And Jordan, who is completely confused about whether he is a “real man.” People often comment about how my characters are so beautifully flawed. I always smile at that, because, um, yeah. Those flaws are me. I definitely have a tendency to put my issues out there!

BA: On top of being a Young Adult fiction author, you’ve been deeply involved in the sports world for quite a while. Sports culture and queer culture have begun to overlap a lot more in recent years. So how does the overlap now compare to when you started working in sports?

BK: It’s so different now! When I was at ESPN, when I came out and became the first openly gay man there back in 2001, the sports world was so closed to LGBTQIA+ people, particularly gay and bi men (and trans and intersex people). I am amazed these days when I hear about another baseball team holding a Pride Night, or another young athlete coming out. Nowadays, that seems to happen on a weekly if not daily basis. Back then, I could count those of us who were out in sports on one hand!

BK: Just a big, understanding hug. It’s hard, isn’t it? It’s hard to stand up and say, “This is me” when society tells you that who you are is wrong. All I can say is that you’re totally, one hundred percent fine. The problem isn’t you; it’s the world. And it’s getting better. I wish you freedom. I wish you a get out of jail free card. And I hope the day comes where you can be you, always! 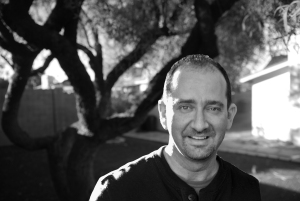 Bill Konigsberg is the award-winning author of five young adult novels. The Porcupine of Truth won the PEN Center USA Literary Award and the Stonewall Book Award in 2016. Openly Straight won the Sid Fleischman Award for Humor, and was a finalist for the Amelia Elizabeth Walden Award and Lambda Literary Award in 2014. His debut novel, Out of the Pocket, won the Lambda Literary Award in 2009. Honestly Ben, received three starred reviews, from Publisher’s Weekly, Booklist, and School Library Journal. His fifth book, The Music of What Happens, was released in February of 2019. Prior to turning his attention to writing books for teens, Bill was a sports writer and editor for The Associated Press and ESPN.com. He lives in Chandler, Arizona, with his husband, Chuck, and their Australian Labradoodles, Mabel and Buford.