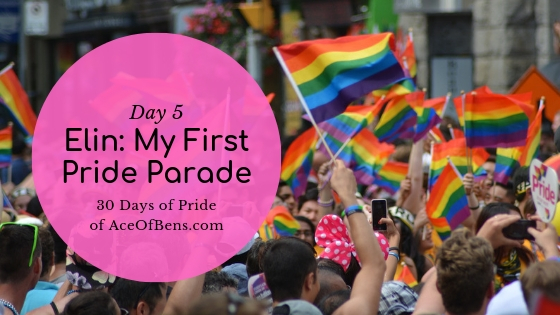 Welcome back to 30 Days of Pride! Elin is here today to talk about her first time at a Pride Parade, and honestly, I’m a bit jealous, because I’ve never been to one myself. But at least I get to live a bit through her post here, and maybe you can too! Here’s Elin:

First of all, I’d like to say a huge thank you to Ben for hosting me on their blog today, and to Ben, Tay, and Kitty for hosting this lovely, month-long, event.

These past 12 months have probably been my queerest ones so far. I attended A-Camp, a camp for trans individuals and queer women, I saw both Hayley Kiyoko and Dodie in concert, I got to visit the bookshop Gay’s the Word in London. And of course, the subject of today’s post, I attended my first ever Pride parade in August of 2018.

First, maybe I should introduce myself? My name is Elin, I live in Sweden and use she/her pronouns. I am bi, and on the ace spectrum, and have known and been comfortable with that for quite some time now. For years I’ve been out and proud online, first on Tumblr and then on Twitter. I never really got to the point of bringing that into my “real” life, though. (Which is a term I’m only using for easy access. My life online and the friends I have made here are just as real as anything else, thank you very much.) I’ve not actually come out to most people around here. What I have done, though, is adopted a kind of “fuck it” attitude about it, where I’ve stopped actively hiding my sexuality. Some people pick up on it, some people don’t, barely anyone asks me about it. This is the Swedish way.

Going back to Pride 2018, it’s not really the same here as in the US. For starters, Sweden doesn’t have a national Pride Month. We do it at different times during the summer, from region to region, and most places celebrate for a week each. The parade is usually held on a Saturday. What I have been quietly celebrating on my own each year is Stockholm Pride Week, which generally falls at the end of July/beginning of August. Before last year I had never actually taken the time to go to Stockholm and partake in the festivities. Since high school, I’ve always had summer jobs keeping me busy during the week. Now I have a full-time job, and being an introverted, shy, easily overwhelmed person, I always chose to stay home during the Pride Week weekend. Then, last year, one of my oldest friends asked me to walk in the parade with her. She is bisexual, and she is one of the people I am almost 100% sure knows I am too, but neither of us has outright brought it up. I was feeling brave, so I agreed. Now, if I’m being completely honest, I was excited to finally experience Pride Week for real. But I was also feeling kind of stressed and very nervous. At the time, I had a lot on my plate, and I had moments where I seriously thought about cancelling because I had so many other things I needed to do. I thought, how good can it actually be? It’s not like I’m actively hiding and am never around other queer people. They’re just online instead of physically around me. I’m not aching to scream who I am out loud so that everyone can hear. I don’t really need this.

Hoohhhh boy, was I wrong.

This might not be news to all of you, but walking in the Pride parade was definitely one of the best decisions I made in 2018. Before I did it, I knew that Pride and the celebrations and being around so many other queer people bring this feeling of community and happiness, but I didn’t really know, if you get what I mean? Without having experienced it before, you can’t really imagine it. Not to its full extent.

There are so many little details that are sort of a blur now but like a happy blur? For example, I can’t remember where in the parade or after who, my friend and I walked. I just remember that it was a big truck with two guys on the back and that they were playing a lot of music. Sometimes the speakers would cut out, but that was okay because everyone just continued singing the song and dancing anyway. The ground was still wet in a lot of places because it had been raining for days before and earlier that morning. But during the parade, the sky cleared and the sun shone. It’s like the gay celebrations were too strong for the rain clouds. One of the most surreal things about the whole experience was when my friend grabbed hold of me and whispered Amy Diamond in my ear, pointedly looking over to the other side of me. I turned, and there was Amy Deasismont, dancing with her friends only a meter away from me. I don’t know if she is someone people outside of Sweden know about, but she is a singer and actress who was the most active around 2005-2008. She was the first musical act I became a huge fan of, back when I was 10. I remember looking at photos of her with her fans, being so jealous I wasn’t them. And there she was, 10 years later. Of course, I didn’t approach her. This was her private moment with her friends. I was a bit starstruck for my 10-13-year-old self, though. The fact that my first ever idol was here, dancing in the Pride parade alongside me, almost made me cry.

At several points, I found myself just looking around at all the happy and beautiful people around me. I thought, “I don’t know these people and their lives. I don’t know what they do day-to-day. But right now, everything is put to the side, and we’re all just safe and happy together.” I had to hold back tears so many times. The whole experience was overwhelming.

When the parade ended, I had to go. As I said, I had other things I needed to do and unfortunately didn’t have time to stick around. It was easily some of my happiest hours of 2018, though. I am definitely going again this year, and I can’t wait.

Elin is a 23-year-old comic shop employee by day and book blogger by night, based in Sweden. When she isn’t at home reading or watching TV, she is most likely at a concert or on public transport.