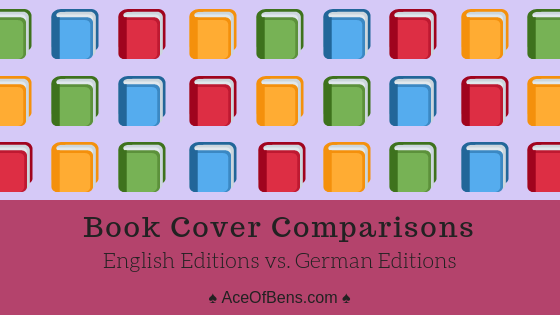 I haven’t done a cover comparisons post in a while, and I came across a German edition of a Maggie Stiefvater book in my library and it was beautiful! So I thought this time around I’d do English language editions compared to German language editions. Here are five pairs that I found different enough from each other to judge. 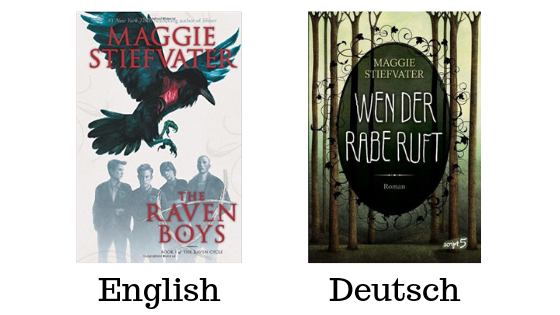 [Literal Translation: Whom the Raven Calls] That German cover is really aesthetically pleasing. I love the green colors and the swirls coming out of the oval in the middle. Plus the Latin-speaking trees are front and center on that cover! Overall, though, I don’t feel it fits the first book too well. Plus, I really like seeing my raven boys on the cover and that painted Raven (and the other painted things on the rest of the series’ covers) is so beautiful and I’ll never et over that. 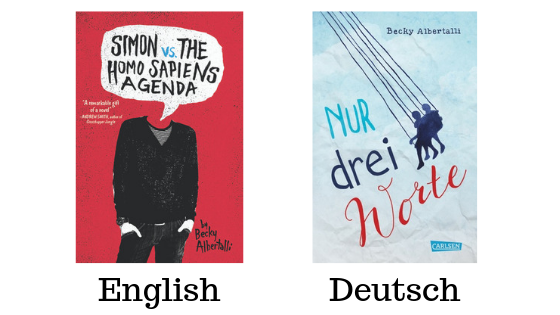 [Translation: Just three words] So that red Simon cover is Iconic and I love it because of that. Still, I have to admit the image part of the German cover is winning me over. This comparison is weird for me because the German title would make me roll my eyes but the image of the teen with a speech bubble for a head wouldn’t draw my attention much more. So can I take the picture of them on a swing against a crumpled paper sky background with the English title, please? 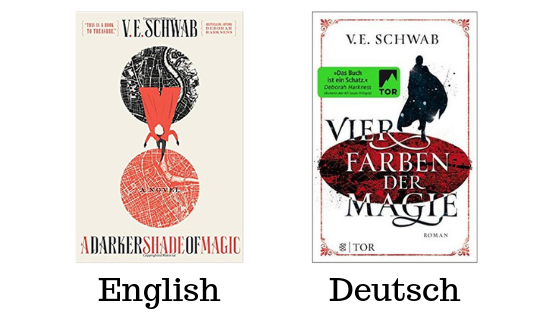 [Literal Translation: Four Colors of Magic] I don’t know if I’ve just seen the US cover too often or what, but I’m not a huge fan of the US covers of the Shades of Magic series. I think it also has something to do with that beige color as the background. Honestly, I really like that illustration of Kell going between the Londons! But at the same time, the fact that it looks like he’s going from Black London to Red London doesn’t make sense to me since that’s not a possibility in the first book?? I don’t know. The main thing I don’t like about the German cover is that I can’t find an online version without that green rectangle on it. And if that’s actually part of the cover then Tor, baby what is you doing??? 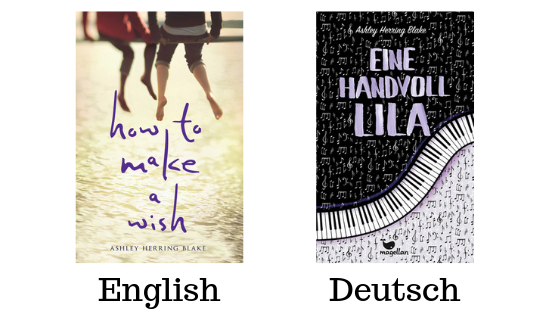 [Literal Translation: A Handfull of Purple] At first, I was completely set on choosing the English cover as my winner, but the more I think about it, the less I’m sure. What caught my eyes on the English edition was the golden water that takes up most of the cover image and the purple text. It’s such a pretty contrast. Yet, the more I look between the two covers, I think I’d be more likely to pick up the German edition. To me, the English edition seems so much more generic, as pretty as it is. The cover for Eine Handvoll Lila is really busy and I think that’s what put me off at first, but it’s growing on me.

Next Year in Havana / Nächstes Jahr In Havanna by Chanel Cleeton 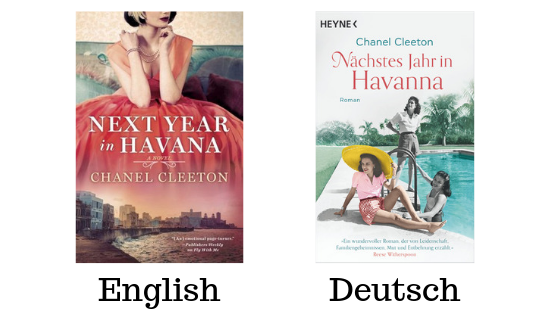 [Literal Translation: Next Year In Havana] Okay, so I am IN LOVE with both of these covers! I love the image of the woman with the big fluffy pink dress that fades into the coast of Havana. I love the image of women by the by the pool with two of them in black in white because that must be the main characters older family members when they were her age. They’re just—I just love both of these so much! Out of all the book cover comparisons, this one feels the most impossible. Therefore they’re both winners.