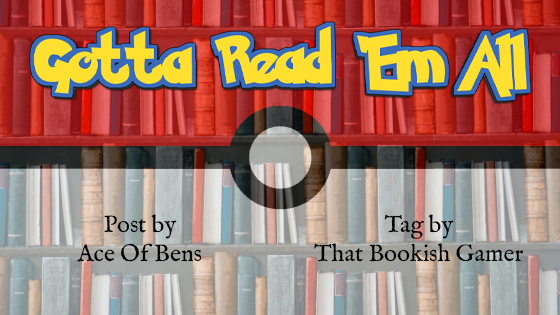 In honor of the new Detective Pikachu movie hitting theaters yesterday, I thought it’d be appropriate to find a Pokémon tag to do. I stumbled upon the Gotta Read ‘Em All tag by Sammantha @ ThatBookishGamer, and I figured I’d give it a go, since I am, indeed, trying to read all the books.

Ugh, there are too many to pick from! When this is the case, I usually go with a recent favorite. This time, I’m putting The Poet X by Elizabeth Acevedo. So I didn’t read it that recently. But it’s a damn good story and an even better audiobook (read by the author herself). Plus Acevedo’s second book came out earlier this week and I’m so excited to read it!

Not to be super predictable, but I’m going to say Red, White & Royal Blue by Casey McQuiston for this one because I’m still not over how beautiful Alex and Henry are as a couple and as individuals. If they’re not a fire-hot romance, then I don’t know what is.

Okay, so one of my favorite graphic novels ever (which is a series at its beginning) is Moonstruck, Vol. 1: Magic to Brew by Grace Ellis, and it’s such a lovely read. There’s so much casual diversity which I appreciate so much. But it really focuses on the relationships between these characters who are all pure cinnamon buns (even the vicious ones, I love them). It’s also in a fantasy world with all these mythical creatures as characters. Overall, I’m in love with this book.

I remember reading The Disasters by M.K. England at the end of 2018 and getting such a bad book hangover from it that I didn’t want to start any other books! I just wanted to start the audiobook over again and stay in Nax’s world. Honestly, now that I’m not under the pressure of finishing a reading challenge, I might have to listen to the book again soon.

I read a lot more contemporary than I realize (gotta read ’em all, right?), but I’ve read Nimona by Noelle Stevens which is hella action-packed. Nimona is a badass that’ll fight anything in her way and, damn, that’s the kind of courage I aspire to have. Also, did y’all see we’re getting a Nimona movie in a couple years?! I’m so excited to see the action on the big screen!! (Or probably more likely, my laptop screen.)

So, I felt guilty for not recognizing it myself before it came out and bringing it up in my review, but I’ve since realized (by others pointing it out on Twitter) that Four Dead Queens by Astrid Scholte has the bury your gays trope. I suppose I didn’t notice because the two gay characters are half of the four dead queens. So we all know from the start that they’re going to die. Still, they’re the only two queer characters in the whole novel. It’s problematic even if it’s a good mystery story.

I’m still in the middle of the audiobook, but all of the main characters in Anger is a Gift by Mark Oshiro are so down to earth and relatable. Everyone is so down to earth, because they’ve seen the harsh realities of life. It’s unfortunate, but they almost have no choice but to be like that. Still, they’re a group of teens with smart heads on their shoulders.

I think the book was written to be predictable to an extent, but I have to say The Sun is Also a Star by Nicola Yoon. This end up a 3-star read for me. I was expecting this to be some sort of redemption from the ableist mess that was Everything, Everything, and it was better because it was Own Voices. It’s just that I’m not a fan of the Instalove™ trope. I’m not bagging on it for being romance, because most of those stories are meant to be predictable! Instalove just doesn’t work for me.

I went on a whole rant about it in my review, but many parts of A Touch of Gold by Annie Sullivan just annoy me. In short, it was such a sexist, predictable story that made me fall asleep while listening to the audiobook. It sounds like such a cool set up, but it was really the disappointment of the year. I didn’t like any of the characters or plot points or anything at all.

I’ve tried several times to describe what The Raven Cycle series by Maggie Stiefvater, but there’s just so much going on in that story? Like, saying it’s about these five teens looking for a dead Welsh king doesn’t work. Should I mention that one of them’s dead?  Do I talk about the house full of psychics? What about Blue’s curse? Or the trees that speak Latin? I just don’t know what to say about these books!

I have to say the Shades of Magic series by V.E. Schwab purely because of Lila Bard. She is the ultimate, most badass pirate/thief I’ve ever read. I’m not really sure what “swashbuckling” means, but if it’s a positive adjective, then I’m sure Lila is that, too!