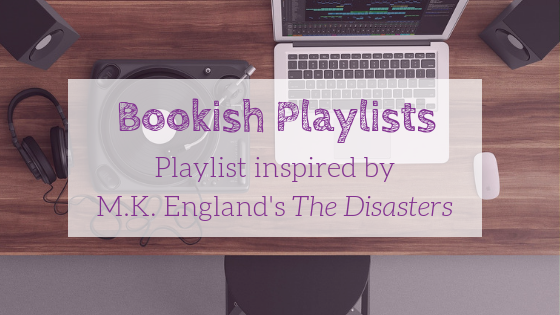 So I’ve decided to try my hand again at making playlists for books since I can’t seem to get this one out of my head. If you’ve read The Disasters, make sure you listen to the playlist and let me know what you think! If you haven’t read it but are excited to, here’s some music to jam out to in the meantime!

As a note, the explanations of these songs are NOT spoiler-free, but listening to the playlist will not inherently spoil anything about the story.

“The Astronaut” by Something Corporate

This song kicks off the playlist with the line “I’ve been sleeping with ghosts”. Each of the characters in The Disasters has their own ghosts to deal with throughout the story. The rest of the song talks about feeling like you’re close to achieving your dreams but something’s in the way, preventing you from getting to those last few steps. Still, it’s a reminder that no matter what, you’re not alone, which is something the main characters learn throughout their adventure.

A lot of the lines in this song are written to be self-contradictory in a way. Overall, Gibbard talks about something he expected to be beautiful but was ultimately the opposite. Nax, Rion, Case, Zee, and Asra spend most of the book dealing with things they expected to be pleasant experiences but quickly go sour.

“Champion” by Fall Out Boy

In “Champion”, Stump sings of a reluctant hero which is a pretty accurate title for all five of the heroes here. The lyrics of this song generally are pretty angsty, matching the cool, hot shot persona Nax tries to pull off. Though, I believe this song can relate to all five in the main cast, especially in the chorus. “If I can live through this, I can do anything.” If they can live through this terrorist attack and stop the bad guys, hopefully they can clear their names and the universe will be theirs to explore once again.

One of Halsey’s first releases, “Empty Gold” is a dark but powerful tune about rising up to a challenge as an underdog. While the music itself certainly has space adventure vibes, I focused more on the lyrics when I added this. Plus Halsey has said that she wanted the song to have a “cinematic feeling” to it. “Empty Gold” was just made to be on a playlist like this.

“Has Our Time Run Out” by Eyeshine

A major element to the plot is time. The heroes don’t have much of it before the terrorist group known as Earth First takes out the colony planets where millions of humans have made their new homes. “Has Our Time Run Out” is an instrumentally intense song (as is its acoustic version). It captures the emotion and urgency of the story well.

Yes, this is a cliché song to add to a fan-made playlist, but it’s fitting. Between Nax’s brother and the family he’s made with the other four main characters, he has quite a few brothers and sisters to relate to this song. Also, it’s a song about having each others’ backs through thick and thin, which these characters prove to each other.

“Kamikaze” by Walk The Moon

So “kamikaze” isn’t exactly a word you want to hear describe a pilot. Still, the song has some good metaphors for Nax. In a way, this song is about beginning anew after events that lead someone to believe they were doomed to start. The kamikaze metaphor can relate to suicidal ideation, yeah, but the rest of the song ties it more to being cocky, crashing, and burning.

Making a playlist with space-themed songs and not putting David Bowie on it? Illegal. But in all seriousness,  this song in specific fits nicely in the lineup. All five of our heroes come from shaky backgrounds, and while they might be looking for knowledge, certainty is the real goal. As the song goes on, the music and the lyrics together become chaotic and it just sounds like it belongs.

“My Name is Human” by Highly Suspect

Stevens has said in interviews that people often misinterpret this song as talking about the flaws of being human. Instead, it’s about how he believes some people are not human at all even though we call them such. Looking deeper, another theme in the song is the difference between “good” people and “evil” people which connects to The Disasters.

The whole song is about paralyzation with fear from past traumas which fits Nax and his piloting fears. There are several scenes in the story showing how much his past haunts him and the lyrics in “Paralyzed” resonate with his situation. If I remember the story behind the song correctly, NF is talking about mental illness struggles. If  so, it works here because mental illness is another thing that pops up throughout the novel.

“The Run and Go” by twenty one pilots

So we all know twenty one pilots and the nature of their songs. They use some pretty intense metaphors to describe mental illness. Nevertheless, it sounds like something that would play during a chase/hiding scene, and it reminds me of one specific scene. Plus this song sounds a lot lighter than most of the others on here so I needed to break up the intensity!

I mean, if the space themes in the lyrics aren’t enough, what can I tell you? Okay, so actually the space themes connect a lot with running away from home or simply exploring what’s out there. Both are ideas that fit our main cast pretty well. Each in the main cast try out at the academy with hopes of escaping their lives on earth and seeing the rest of the universe.

This song’s purpose in the playlist should be pretty evident even without having heard it before. Nax, Rion, Case, Zee, and Asra start off as total strangers but leave the story as a new family. They defend each other, grow together and eventually become a real force to be reckoned with.

“The Story” by Thirty Seconds To Mars

The general tone and feeling of the music in this song is a big reason why I added it. Although there are few lyrics became many of the lines repeat, each of them relates to Nax’s arc and backstory. The line “these are the lies I have created” reminds me a lot of his relationship with Malik, which we learn more about as the story continues.

“Tightrope” by Young The Giant

Honestly, this whole story is like walking on a tightrope with the amount of danger these characters are in. The song illustrates a time of instability, which all of the main characters’ have been in since before the start of the story. And it just gets worse. As evident from the verses and bridge, “Tightrope” is also about pressures from the people around us. It relates to the main cast learning how to fend for themselves in this wild ride.

2 thoughts on “Bookish Playlists | “The Disasters” by M.K. England”