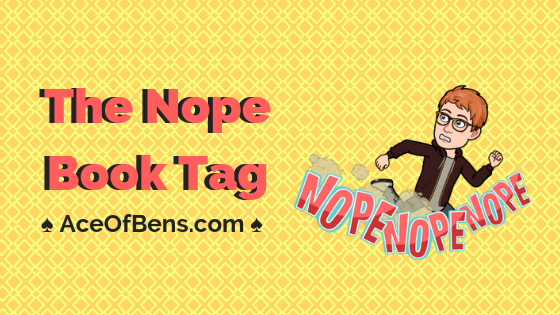 1. NOPE. Ending: A book ending that made you go NOPE either in denial, rage, or simply because the ending was crappy.

Well, I stopped reading the Divergent trilogy because someone told me how the third book ended. I really didn’t care about the spoiler as much as the way it ended, because I told her I was thinking of dropping the first book anyway, which I did. Because why would Roth do that?! Does that count for my answer?

2. NOPE. Protagonist: A main character you dislike and drives you crazy.

Emmy or whatever her name was from Love Is Love by Mette Bach. The whole book was horrible, but I read to the end to review the trans rep and it killed me inside a lot.

3. NOPE. Series: A series that turned out to be one huge pile of NOPE. after you’ve invested all of that time and energy on it, or a series you gave up on because it wasn’t worth it anymore.

I was really into the Maximum Ride series by James Patterson in middle school, but by like the fourth book I realized how trash they are and stopped reading. I refuse to read any of his other books

Apparently there are people out there in the dark corners of the internet who ship Simon and Leah from Simon Vs. just because she had a crush on him, ignoring the fact that the whole book is about Simon coming out as gay and I just wanna know what kind of hetero bulls—

5. NOPE. Plot twist: A plot twist you didn’t see coming or didn’t like.

The twist in Everything, Everything was terrible and I hate everything about it. (Spoiler-y rant follows in white text, highlight to view.) There was no reason to completely ruin your chronic illness rep by revealing that the main character was never actually sick and the mother was just trying to keep her close and never let Maddie leave her like what the actual hell??! I won’t go into how toxic of an idea that is—that people with chronic illnesses may never have been sick in the first place and can just be magically healed with the right diagnosis—but jeezus, how did no one see a problem with that before it was published?

6. NOPE. Protagonist action/decision: A character decision that made you shake your head NOPE.

Every decision the main characters in The Haters made, to be quite honest.

7. NOPE. Genre: A genre you will never read.

Genres are such broad categories so I don’t think I can say there’s one I’d never read. One I’m hesitant to read, though, is

8. NOPE. Book format: Book formatting you hate and avoid buying until it comes out in a different edition.

I actually reaaally don’t like hard covers. They’re pretty, but they’re also awkward to hold when reading because of the dust jacket and I feel like I have to be extra careful when handling them for some reason.

9. NOPE. Trope: A trope that makes you go NOPE.

If we’re being honest, I’m still not clear on the difference between a trope and a cliche so if this doesn’t count, feel free to call me out. But boy, oh boy, do I hate the bury gays trope with a passion. Or the same with any other minority character for the matter. It’s lazy, counterproductive, and offensive as hell.

10. NOPE. Recommendation: A book recommendation that is constantly hyped and pushed at you that you simply refuse to read.

People keep recommending Luna by Julie Anne Peters to me because I’m trans and it’s a book about a trans girl. The problem is I’ve never heard a good review of it from a trans person and I’ve heard it’s hella problematic. Too bad that seems to be the one EVERYONE knows about.

11. NOPE. Cliche/pet peeve: A cliche or writing pet peeve that always makes you roll your eyes.

One that comes to mind is when a first person narrator describes their physical features in great detail in front of the mirror near the beginning of the book. It’s such a cop out, and I hate it. Yes, I used to do it myself, as a little 13-year-old writer, but nah, that doesn’t cut it anymore. Find other ways to describe your characters, PLEASE.

Mayor from The Book of Unknown Americans is totally undeserving. He falls in love with the main character’s daughter who has a TBI and therefore at 14, her brain development  has wavered severely. He sees her as the most beautiful girl he’s ever seen but also romanticizes her disability and strives to be “the only one that really understands her

13. NOPE. Book: A book that shouldn’t have existed that made you say NOPE.

The Black Witch. Just read the Goodreads reviews—it should have never been published.

14. NOPE. Villain: A scary villain/antagonist you would hate to cross and would make you run in the opposite direction.

Pulling a manga out to say that I would not mess with a single one of the villains in Fullmetal Alchemist, because they are well-written, well-developed, and an actual threat, so I, personally would not be about it if they were real.

15. NOPE. Death: A character death that still haunts you.

16. NOPE. Author: An author you had a bad experience reading for and have decided to quit.

So, this is one that a lot of people like, but I’m just going to throw out there that If You Could Be Mine by Sara Farizan is hella toxic (bimisia, transmisia, etc.), and I refuse to read any other work by her despite how good the rep for Iranian characters is. There are other authors I can read that rep from without the TERF-y attitudes.

What are some of your biggest NOPE’s as a reader? As a writer?