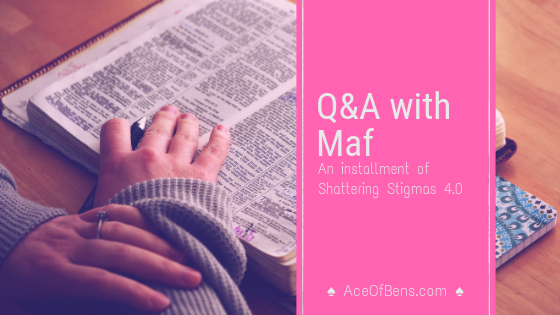 As my blog’s grand finale for Shattering Stigmas 4.0, I would to welcome Maf to Ace Of Bens! Thank you so much to Maf for agreeing to a Q&A and talking about her experiences with mental illness, discussions in the book community, and coping with the rough times of living with MI. You can find more from her on Twitter.

You split your time between living in Mexico and living in Canada. Can you speak to your experiences regarding mental health care in these countries?

I have a relative in Canada who has needed a lot of help regarding his mental health, and while it wasn’t exactly easy to get that help, the help was there, and it never came at any cost because the government does put resources into mental health, it takes a while but at the end of the day, it is there, which isn’t really the case in Mexico, in Mexico, having a mental illness comes at a really high cost, therapists are expensive and medicine is expensive, so my experience has been a lot of “there is help there but it’s either expensive or will take a long time to get to you”

Furthermore, what kind of differences in attitude toward mental illness do you see in the different cultures?

This is a bit of a tricky question to answer because I really don’t believe it’s a culture thing (at least not with Mexico and Canada in specific) I think that in both countries you can find people who are supportive of people with mental illnesses and understanding, and people who still have these erroneous ideas about what having a mental health issue or a personality disorder is like.

I think it depends on each person’s experience, my family for example, is a family that has always had a history with mental illness but before we didn’t know that all the things that were happening were actually symptoms of something that we couldn’t control, and once we started educating ourselves, a lot of things made sense. My mom for example didn’t believe in mental illness, even after years of seeing my grandma struggle and having doctors explain to us what was going on, my mom didn’t believe mental illness was real, until she experienced it herself, and after she did, she did a ton of research, and she is a very conservative Mexican woman who is old school in every way imaginable, but she opened herself to accept something different to what she had been taught all her life, so I think it’s a lot more about the person than the culture.

Since so many of the posts for Shattering Stigmas revolve around books and the book community, let’s talk about it for a minute. What books have you read that have felt validating to your experiences with mental illness? (Or movies or tv shows or any other kind of media you find relevant)

Unfortunately, I haven’t read any books with a character with BPD, I haven’t read many with personality disorders in general, but two books that have felt incredibly validating, have been Saving Francesca and How To Make A Wish, in both books, the protagonist’s mother is struggling with mental illness, in Saving Francesca, Francesca is dealing with depression as well, I read it when I was 15 and at 15 you think you know everything, and you also still absorb a lot of what people are telling you so when someone said I was lazy, I believed it, but after reading Saving Francesca I recognised a lot of the symptoms Francesca had in me, and in How To Make A Wish, the protagonist’s mom is someone who, while well-meaning, refuses to accept she needs help so she hurts and emotionally abuses her daughter, it was a really hard read but I saw my relationship with my mom reflected in that book so much, it’s probably one of my favourite books this year.

What would you like to see in books (movies, tv shows, etc.) in the near future to feel more seen?

Parents with mental illness or personality disorders that are still really great parents, I know it can absolutely be done but what I have seen in media isn’t exactly great, and I live in constant fear of my disorder making me “unfit” to be a mother, even when I know that’s not true, so it would be amazing to see more of parents who struggle with mental health but are still great parents.

What do you wish bloggers did to make the bookish online a community a better place re: discussing mental illness?

I am really lucky to have formed a space in the community where I feel really safe discussing mental illness, but something I do wish would change is the lack of intersectionality in the discussions, I am Mexican, bisexual and have BPD, my experience with mental health issues isn’t the same experience a straight person or a black person will have and we need to talk more about that, these discussions aren’t a one size fits all kind of thing.

What mental health/mental illness tropes are you tired of seeing in books?

“Love can ‘cure’ mental illness” In theory its a cute thing, I used to believe it was romantic, but there are so many things wrong with that, because love cannot fix everything, believing that you can love someone enough to cure them can really hurt both people involved and create more issues than it solves. And in some cases, it makes it look like mental illness is something that shouldn’t be taken seriously because all the main character needed was to make out with someone and BOOM! They’re good!

Shattering Stigmas is an event centered on continuing conversations around mental illness to debunk the stigmas around it. Why is talking about mental health important to you?

As I mentioned, mental illness has always been a part of my life, but I never knew what it was until I was around 17, no one in my family knew. And now that we know what mental illnesses are, certain things and behaviours make sense, and I feel like if there wasn’t such a stigma around mental health and about getting help, things would be different in a way, because people shouldn’t have to wait until their mental health starts affecting their physical health for people to take notice, and when it does start affecting your physical health, you shouldn’t have to deal with people saying “eat healthier and exercise! You’ll feel better!” Because it is way harder than that. But because we don’t talk about it, everyone suffers in silence, everyone thinks they are the only one going through that darkness and that they can’t reach out for help.

What are your top self-care tips, tricks, and secrets?

My biggest self care tip is kind of strange to like say, but I am very very very bad at allowing myself to admit I am not mentally okay, I tell people that I feel like a shaken coca cola bottle about to explode because of how hard I try to pretend I’m okay, but that’s not great because I end up exploding, so what really works for me is just admitting I’m not doing okay, letting myself do things that help me feel a little bit better and just go from there, for me, it really all starts with allowing myself to feel not okay.

Is there anything else you would like to talk about before we go?

Two things that I have been struggling with a lot since I got my BPD diagnosis are:

Forgiving myself for the things I did and the people I hurt when I was in really really dark places and understanding that recovery isn’t linear, it’s more like a really messy squiggly shape.

So I just want to say to anyone who needs to hear it, please be patient with yourself, be patient with your recovery and understand that mental illness is never a justification for hurting others, but be self-aware and work towards getting better, not every person you hurt will forgive you but an important part recovery is to try to forgive yourself.

You can find more from Maf on: