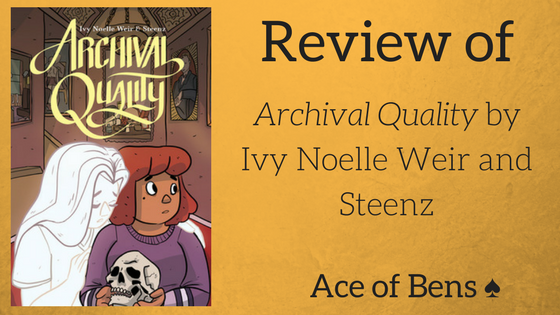 Synopsis: After losing her job at the library, Celeste “Cel” Walden starts working at the haunting Logan Museum as an archivist. But the job may not be the second chance she was hoping for, and she finds herself confronting her mental health, her relationships, and before long, her grasp on reality as she begins to dream of a young woman she’s never met, but feels strangely drawn to. Especially after she asks Cel for help…

As Cel attempts to learn more about the woman, she begins losing time, misplacing things, passing out—the job is becoming dangerous, but she can’t let go of this mysterious woman. Who is she? Why is she so fixated on Cel? And does Cel have the power to save her when she’s still trying to save herself?

Content Warnings: Talk of asylums and the poor treatment of mentally ill people in the past

Writer Ivy Noelle Weir and artist Steenz debut their talents in Archival Quality, a graphic novel with a spooky mystery and an important message.

The main character, Cel starts her new job at a museum that’s said to be haunted. the people who’ve worked there for a while all joke about the rumors or completely disregard them as in most stories about haunted places. For those who are kind of weary about reading ghost stories, this story isn’t too creepy. I’m also kind of iffy with paranormal stories because it seems like most of them are horror or thriller, but I wouldn’t categorize this story as either. So unless it’s a really sensitive topic for you, the paranormal part shouldn’t be too triggering.

However, when the plot gets to the backstory of the ghost, that’s where some content warnings (which are listed above) come into play. Since those are spoilers I won’t go into too much detail unless asked. Despite the somewhat gruesome details of how mentally ill people were treated in asylums, the story carries a critical message that highlights how far we’ve come with mental health care and how far we still have to go.

That being said, this is definitely more that just a paranormal story and is very well thought out. Not only does it have the message about mental illness but also about relationships. Since Cel starts a new job at the beginning of the story, she meets a lot of new people, some friendly, some not. Much of her arc is figuring out who to trust and who to disregard, which, of course, is much harder than it sounds.

Something I would have liked to see go into more detail is Cel’s relationship with her boyfriend, Kyle. He’s been worried about her pretty much ever since she’s started this new job because she works the night shift and they never get to see each other anymore, not to mention the fact that she’s suddenly wrapped up in finding a way to help a ghost that he doesn’t believe exists. This puts a strain on their relationship to the point where Cel moves out of the apartment for a period of time and they take a break. Unfortunately, this subplot got little attention and was done in a way that made Kyle look like a jerk to Cel even though I know he was well-meaning. If the author had put a bit more detail or a couple extra scenes into this part of the story, I think it could have been easily fixed.

The last thing I want to mention is the art style. Steenz’ characters are cute and her designs are diverse in an unforced way that positively adds depth to the story. I also love that she put a fair amount of color throughout the story considering its paranormal theme. The only part I wasn’t fond of was that some of the panels were a bit sloppy compared to the rest.

Final Thought: I would definitely recommend to graphic novel readers who like ghost stories!

Thank you to NetGalley and Oni Press for providing a copy in exchange for an honest review!