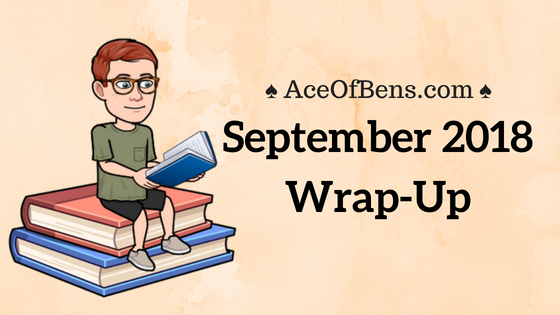 Well, I hate to say it, but I have to be honest: September was a terrible month for reading. Only a month in, and school is already kicking my butt. I’ve barely had enough time to do everything I need to do, let alone what I want to do. Anyway, here’s how my month in books looks.

Synopsis: From a simple, brilliant premise—to create comics from the weirdest and funniest tweets around—artist Mike Rosenthal (@VectorBelly) has crafted a hilariously surreal world that has attracted over a million followers to his blog Twitter: The Comic. Each carefully curated tweet delivers concentrated humor in the language of the Internet, reproduced in the comics with typos and all. As envisioned by Rosenthal, each comes to life through a bizarrely recognizable cast of bassoon-playing cops, sarcastic teens, bear MDs, clueless dads, potential insect overlords, and more. Featuring more than 120 of these comics, including dozens unique to this book, Twitter: The Comic (The Book) is a dementedly funny vision of our strange online age.

A Gathering of Shadows by V.E. Schwab

Now, restless after having given up his smuggling habit, Kell is visited by dreams of ominous magical events, waking only to think of Lila, who disappeared from the docks as she always meant to do. As Red London finalizes preparations for the Element Games–an extravagant international competition of magic meant to entertain and keep healthy the ties between neighboring countries–a certain pirate ship draws closer, carrying old friends back into port.

And while Red London is caught up in the pageantry and thrills of the Games, another London is coming back to life. After all, a shadow that was gone in the night will reappear in the morning. But the balance of magic is ever perilous, and for one city to flourish, another London must fall.

Synopsis: One World Two is even more ambitious than Volume One in its geographic scope, featuring twenty-one writers drawn from every continent. Most of the stories are unique to this volume, while others are appearing for the first time in English (Egypt’s Mansoura Ez-Eldin and Brazil’s Vanessa Barbara). The themes and writing styles are as richly diverse as their writers’ origins.

The collection is built around a loose theme of building bridges. It is interested in the human condition as a dynamic central line linking individuals, cultures and experiences: east and west, north and south, and, perhaps most importantly, past, present and future.

Reason: It was giving me an existential crisis and I’m not in the mental space for that right now lololol

Synopsis: Actually Sarah is several human beings. At once. And only one of them is sixteen. Her parents insist she’s a gifted artist with a bright future, but now she can’t draw a thing, not even her own hand. Meanwhile, there’s a ten-year-old Sarah with a filthy mouth, a bad sunburn, and a clear memory of the family vacation in Mexico that ruined everything. She’s a ray of sunshine compared to twenty-three-year-old Sarah, who has snazzy highlights and a bad attitude. And then there’s forty-year-old Sarah (makes good queso dip, doesn’t wear a bra, really wants sixteen-year-old Sarah to tell the truth about her art teacher). They’re all wandering Philadelphia—along with a homeless artist allegedly named Earl—and they’re all worried about Sarah’s future.

But Sarah’s future isn’t the problem. The present is where she might be having an existential crisis. Or maybe all those other Sarahs are trying to wake her up before she’s lost forever in the tornado of violence and denial that is her parents’ marriage.