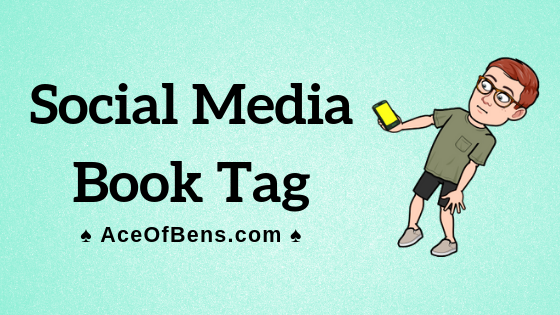 A couple weeks ago, I was tagged by Katie @ Lost In Pages to do the social media book tag! It’s an older tag that was originally created by FaultyDevices on BookTube and carried over into the blogging world; the original video is here.

I actually haven’t read many books under 200 pages that aren’t either super short or comic collections from internet artists. So I don’t have many to pick from, but my favorite is easily George by Alex Gino which is an adorable middle-grade story about a trans girl who just wants to play Charlotte in her class’ production of Charlotte’s Web. that I wish I could give to everyone of all ages. Also I can’t wait for their new book, You Don’t Know Everything, Jilly P, coming out on the 25th!

2. Facebook — A book that everyone pressured you to read

I don’t give into “peer pressure” too often when it comes to reading simply because I’m such a mood reader. If I went around and read books when others told me to, I’d never get reading done because I wouldn’t be interested ever. But one I felt pressured to read was Aristotle and Dante Discover The Secrets of the Universe, which I’d enjoyed at the time, but now that Sáenz has been exposed for harassing reviewers that he thinks “misinterpreted” his books, I couldn’t care less about it.

3. Tumblr — A book you read before it was cool

Okay, so I really hate to use this one because this book is REALLY popular, but this is the only one I can think of! I’m unfortunately more of a follower when reading books now that I’ve become active in the book community on social media. But I mean, if one of my friends is yelling about how much they love of a book, of course I’m gonna add it to my TBR! Anyway, I remember getting this book in sixth grade from the Scholastic book fair (oh my gosh, middle school flashbacks) not too long after its initial release and loving it. Also now that I think about it, my predictions for what the sequel would be were sooo off and it’s almost embarrassing

4. Myspace — A book you liked when you were younger but probably wouldn’t like now

I really loved this book in when I read it in middle school because it’s about a girl who comes from a family in which everyone has a savvy which is like a superpower of sorts, and the storyline from what I remember was so well written (granted, I read this eight years ago). When I worked at the public library last year, I saw that this series has two sequels that follow two of Savvy‘s main character’s relatives, so I checked out the second book in the series. When I started reading it, I was so surprised because Law uses such ridiculously over-poetic language in the book and it sounds so unnatural. I was so disappointed and I’m sure if I came back to Savvy, I’d hate it.

There are a lot of beautiful covers out there, , but this one doesn’t get as much attention as it deserves. It’s about a Greek-American boy from a very traditional, very abusive family who is hiding his sexual orientation from them and trying to blend in rather than make any waves and ruin anything he has going for him. I read this a while ago and don’t remember too many details, so excuse my vague description!

But I love the detail on the cover where the paint is smudging the word “blending” and the black ink is mixing with other colors. Plus the rainbow sprinkles around the edges is such a cute detail. I love this cover and I love this book!

6. YouTube — A book you wish would be made into a movie/TV show

The Percy Jackson series! So yeah, there’s those two movies that starred Logan Lerman as Percy Jackson, but they were honestly the poster child for terrible book-to-movie adaptations. They’re honestly a The Last Airbender situation where fans don’t even want to mention that they exist because they were that big of a trainwreck™.

So I fully believe, with the popularity that this series still receives 13 years after its first book’s initial release, Percy Jackson and the Olympians deserves a second shot at a page-to-screen adaptation.

7. Goodreads — A book that you would recommend to anyone and everyone

This is my favorite non-fiction book that I’ve read since I’ve begun reviewing books. It’s a memoir but also a history of the transgender rights movement. People tend to think that the gay and lesbian rights movement in the United States started in the 1970s, then the transgender community just leeched on any time from the 1990s to now, depending on who you ask. Wilchins explains through a series of personal anecdotes and stories from others’ journeys that our community was around and making waves long before the general public decided to pay attention. I found it so interesting that Wilchins has been such a huge advocate and activist in the community and has participated in so many major events that furthered our rights and recognition. The number of events and amount of behind the scenes work that she tells of is also astounding because I’ve always known that I didn’t know much about the trans community’s history, but you truly never know how much you don’t know until you read a book like this. And that is why I would recommend this to everyone!

Now that I’ve answered all the questions, time to tag some friends!