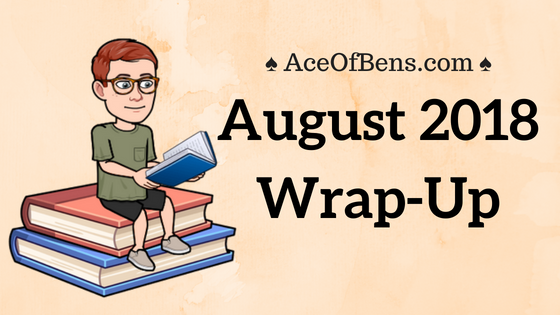 August has ended, meaning that school is starting again and autumn will soon follow. In my last month of summer vacation, I finished 4 books and started 4 others.

We Are Okay by Nina LaCour

Synopsis: You go through life thinking there’s so much you need… Until you leave with only your phone, your wallet, and a picture of your mother. Marin hasn’t spoken to anyone from her old life since the day she left everything behind. No one knows the truth about those final weeks. Not even her best friend, Mabel. But even thousands of miles away from the California coast, at college in New York, Marin still feels the pull of the life and tragedy she’s tried to outrun. Now, months later, alone in an emptied dorm for winter break, Marin waits. Mabel is coming to visit, and Marin will be forced to face everything that’s been left unsaid and finally confront the loneliness that has made a home in her heart.

Synopsis: In Savannah Espinoza’s small New Mexico hometown, kids either flee after graduation or they’re trapped there forever. Vanni never planned to get stuck—but that was before her father was diagnosed with Huntington’s disease, leaving her and her mother to care for him. Now, she doesn’t have much of a plan at all: living at home, working as a performing mermaid at a second-rate water park, distracting herself with one boy after another. That changes the day she meets Leigh. Disillusioned with small-town life and looking for something greater, Leigh is not a “nice girl.” She is unlike anyone Vanni has met, and a friend when Vanni desperately needs one. Soon enough, Leigh is much more than a friend. But caring about another person stirs up the moat Vanni has carefully constructed around herself, and threatens to bring to the surface the questions she’s held under for so long.

Synopsis: Rodrigo is not very good at being a hero, but he’s convinced that if he catches the speedster who’s been terrorizing the South Brazilian high society and stealing their goods, it’ll be his heroic breakthrough. On top of that, he’s also worried about his grandma coming to live with him and his sister, when the last time they’d seen each other was before Rodrigo’s transition. But it’s okay. He’s got this. He’s totally got this. (Right?)

Synopsis: Seventeen-year-old Keralie Corrington may seem harmless, but she’s, in fact, one of Quadara’s most skilled thieves and a liar. Varin, on the other hand, is an honest, upstanding citizen of Quadara’s most enlightened region, Eonia. He runs afoul of Keralie when she steals a package from him, putting his life in danger. When Varin attempts to retrieve the package, he and Keralie both find themselves entangled in a conspiracy that leaves all four of Quadara’s queens dead. With no other choices and on the run from Keralie’s former employer, the two decide to join forces, endeavoring to discover who has killed the queens and save their own lives in the process. When their reluctant partnership blooms into a tenuous romance, they must overcome their own dark secrets in hopes of a future together that seemed impossible just days before. But first they have to stay alive and untangle the secrets behind the nation’s four dead queens.

Synopsis: Actually Sarah is several human beings. At once. And only one of them is sixteen. Her parents insist she’s a gifted artist with a bright future, but now she can’t draw a thing, not even her own hand. Meanwhile, there’s a ten-year-old Sarah with a filthy mouth, a bad sunburn, and a clear memory of the family vacation in Mexico that ruined everything. She’s a ray of sunshine compared to twenty-three-year-old Sarah, who has snazzy highlights and a bad attitude. And then there’s forty-year-old Sarah (makes good queso dip, doesn’t wear a bra, really wants sixteen-year-old Sarah to tell the truth about her art teacher). They’re all wandering Philadelphia—along with a homeless artist allegedly named Earl—and they’re all worried about Sarah’s future.

But Sarah’s future isn’t the problem. The present is where she might be having an existential crisis. Or maybe all those other Sarahs are trying to wake her up before she’s lost forever in the tornado of violence and denial that is her parents’ marriage.

A Gathering of Shadows by V.E. Schwab

Now, restless after having given up his smuggling habit, Kell is visited by dreams of ominous magical events, waking only to think of Lila, who disappeared from the docks as she always meant to do. As Red London finalizes preparations for the Element Games–an extravagant international competition of magic meant to entertain and keep healthy the ties between neighboring countries–a certain pirate ship draws closer, carrying old friends back into port.

And while Red London is caught up in the pageantry and thrills of the Games, another London is coming back to life. After all, a shadow that was gone in the night will reappear in the morning. But the balance of magic is ever perilous, and for one city to flourish, another London must fall.

Synopsis: One World Two is even more ambitious than Volume One in its geographic scope, featuring twenty-one writers drawn from every continent. Most of the stories are unique to this volume, while others are appearing for the first time in English (Egypt’s Mansoura Ez-Eldin and Brazil’s Vanessa Barbara). The themes and writing styles are as richly diverse as their writers’ origins.

The collection is built around a loose theme of building bridges. It is interested in the human condition as a dynamic central line linking individuals, cultures and experiences: east and west, north and south, and, perhaps most importantly, past, present and future.