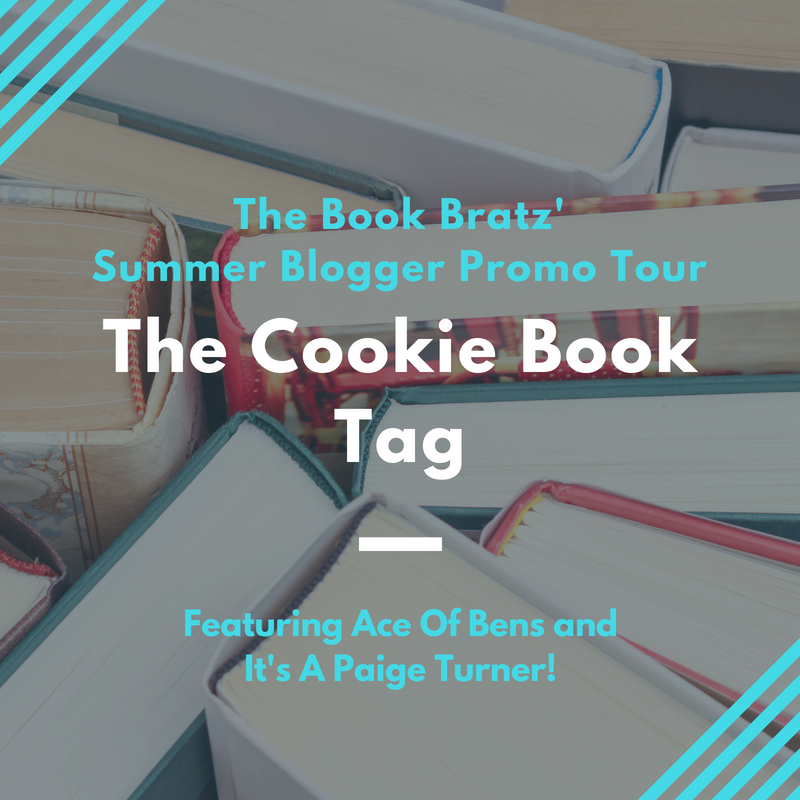 This week’s prompt, provided by The Book Bratz, is to do a book tag! Paige and I found the Cookie Book Tag and decided it was just too cute for us not to use this for our Summer Blogger Promo Tour post this week!

Ben: Now that I’m out of high school, I’m much more open to reading classics. Interesting how that works… Still, my favorite so far is Hamlet by the one and only Shakespeare. I read it in twelfth grade and have since reread it in parts several times. I need to make time to read it in its entirety soon because there are just so many layers to this story and I really love it.

Paige: I will admit, I haven’t read as many classics as I would like and I do need to read many more. That said, I have always really enjoyed Jane Austen’s books, particularly Northhanger Abbey. I read this book for my first university English class where our theme had been cliche. Reading this book through an academic lens had helped me pick out little details and nuances in the Jane Austen’s writing that made reading this book very enjoyable.

Ben: No doubt, The Seven Husbands of Evelyn Hugo by Taylor Jenkins Reid! I’m following like three people on Twitter that have “Evelyn Hugo” in their display name or their @username, and I’m tired of being left out. The book sounds amazing, and I need to get a copy of it like yesterday!

Paige: I really need to read the Ember in the Ashes series by Sabaa Tahir! I’ve only heard amazing things from reviewers that I trust, but for some reason I haven’t started the series yet. Maybe it’s because the series is so hyped up now that I’m scared to be let down, but who knows. The important thing is I should’ve read it yesterday.

Ben: Normally, I would say Anna-Marie McLemore, but I think I’ve mentioned that enough times already. This time I’m going to say Victoria Schwab. I recently finished A Darker Shade of Magic, which I adored and I’m starting A Gathering of Shadows as soon as I get through some books that are of a higher priority. Even though I haven’t finished this series, I can’t wait to dive into the rest of her books!

Paige: Ooh this is so hard! There are so many authors that I can’t get enough of, whether that be their books or their Instagram stories. At the moment, I have to say Angie Thomas. Not only is The Hate U Give phenomenal, but Angie is hilarious on Instagram and she was one of the most lovely authors that I have ever met. No one deserves the success that The Hate U Give has had more than her.

Ben: The first book that comes to mind is We Are Okay by Nina LaCour. Maybe it’s because I just finished it the other day, but that doesn’t make it less true. This story is heavy. There is so much that Marin has to unpack about her past when Mabel comes to visit. Her whole narrative and the plot twists in the flashbacks is so much. I’ll go into more detail in the upcoming weeks when I post my review, so for now, I’ll leave it as, “This is such an emotional rollercoaster.”

Paige: I’m generally a very emotional person, so I have many books that would fit this question but I have to go with Lord of Shadows by Cassandra Clare. Cassandra Clare does dramatic, emotion-destroying twists very well and I remember reading this book as being a complete shock to the system. Just when you think it’ll be okay, everything goes to crap! When I read those last few pages, my jaw was on the floor and I was crying. If that isn’t an emotional rollercoaster, I don’t know what is!

Ben: Answering on the “vice versa” part, I want to say Fix Me by Lisa M. Cronkhite was a lot better than its cover. I mean, the cover is nice. I like the colors. It’s just not something that I would give a second glance if I hadn’t come across it on Twitter. Thankfully, by chance, the author followed me on Twitter and I was interested enough to request it on NetGalley, and I loved it! [You can find my review for this book here!]

Paige: I want to preface this by saying that I by no means hate these covers, I just can’t think of another answer to this question. I’m going to go with the first three books in The Mortal Instruments series by Cassandra Clare. I’m not a huge fan of people on covers, especially if it’s only from the neck down. I feel like even City of Bones, which isn’t my most favourite book in this series, is way better than what you would assume based on the headless shirtless man on the cover.

Ben: I’m going to go back to one of my most disappointing reads ever – Everything, Everything. When I picked it off the shelf at my library, I was so excited to take it home and read about a girl who has this disease that makes her allergic to everything but still gets a happy ending. Unfortunately, that’s not at all what the book was. Maddie turns out not to even have the disease she believes she has in the first place! I was so crushed by the ending.

Paige: My most recent read that wasn’t what I had expected was The Wicked Deep by Shea Ernshaw. This book was a lot spookier than I was expecting! I also didn’t go in to it with many expectations or evening thinking that I would like it, but I was pleasantly surprised.

Ben: I think I have to go with The Raven Cycle series. It’s one of those fandoms I can always return to and never lose the magic of. You can tell I love these books because I even bought a Spanish edition of the first book, The Raven Boys. Hopefully, one day I’ll complete that collection. Plus there’s a spin-off series due to come out soon-ish, and I just can’t wait!

Paige: Can I say Harry Potter? I know it’s so typical, but it’s so true. An alternate answer would be Carry On by Rainbow Rowell. This is partly because it feels like Harry Potter, but also because it has all those adorable little rom-com type moments that I love in Rainbow’s other books. Simon and Baz are also up there with Malec for one of my top OTPs of all time.

That’s all for this week! Make sure you’re following Paige on Twitter and Instagram so you don’t miss our post on her blog next Sunday. Have a great day, friends!