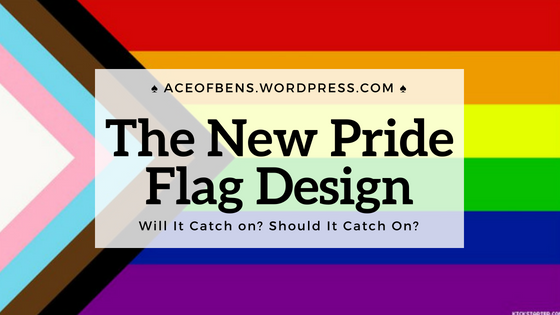 I think it was on Tumblr I first saw the newest design for the queer pride flag. By now, anything I see on Tumblr related to politics gets no more than an initial glance because I know the website’s culture and history of inflating social issues to outrageous proportions. However, when I saw the flag on Twitter, I figured this movement was gaining enough traction for me to look into.

Initially, I was hesitant to accept yet another variation of the pride flag used by people of so many identities. In the past year alone, I’ve seen tons of new pride flags relating to specific identities. To name a few, I’ve seen the flags for demi girl, demi boy, and lesbian identities waved with more frequency. I’ve even seen someone design a flag for homosexual men inspired by the lesbian flag. But it seems that many artists have tried recently to put their own spin on the famous rainbow that has symbolized our community for decades.

Of course, many of these designs were made for subcategories of the community like adding a red maple leaf in the middle for queer Canadians. Many were merely jokes to begin with, such as the barcode pride flag that mocks the visual disaster that was the EU Barcode Flag. But this design by artist Daniel Quasar is really making rounds through social media. Xir Kickstarter even raised over $25,000 to bring this design into production. But will this design catch onto the mainstream, or will it be another attempt that has its fifteen minutes of fame and gets forgotten?

Well, it certainly has the potential to become mainstream. The Philly pride flag with the black and brown stripes has been popularized in only a bit over a year since its unveiling. Ultimately, it will be up to the community whether this flag is actually what we need to feel as if everyone is equally represented and adequately included.

To add my two cents, I do not believe this design will catch on. I also don’t think it should. Firstly, the original eight-striped rainbow pride flag designed by Gilbert Baker was created with the purpose of being inclusive of all queer identities, which is why each color represents a different aspect of the community instead of eight specific identities.

Unfortunately, there was a mix of people only listening to cis, gay, white men’s opinions and concerns, and those men taking over the pride flag (and community) for themselves. Because of this, the rainbow flag, which was later bumped down to six stripes, has become more of a symbol for gay men than for the whole community. Or so it seems within the community.

Most people I’ve talked to with little to no knowledge of queer culture are surprised to learn there is a pride flag for any queer identity you can name. I once gave a class presentation that included the transgender pride flag, and all fourteen students and the professor had never seen it before. Most, if not all, had no idea there were more than the rainbow flag. So, while outside perception is continually changing, our community is majorly symbolized by the rainbow flag.

Intercommunity issues make the conversation tricky. We understand that each identity has its own flag, and many people rep their specific identity’s flag rather than the rainbow one. This is fine. We need to do what we feel more comfortable with. However, I don’t believe that means we need to change how our community as a whole is perceived.

To clarify, I am certainly not suggesting that we ditch the idea of the Philly pride flag. The black and brown stripes were a necessary addition.  Not to mention, it’s a separate case from the new flag adding the black and brown stripes and the trans flag colors in a triangle on the side. For me, this raises concerns about how our community would be perceived with Quasar’s design.

I don’t like that the black and brown stripes were taken from the top of the flag and put on the side. From my understanding, the point of adding those stripes to the top was to reassert the sentiment that including people of color in your activism should not be an afterthought. Putting them on the side, overtop the original flag feels like an afterthought to me. It should be noted here, however, that I’m not a person of color and my opinion can and should be taken with a grain of salt.

However, a similar point can be made about the addition of the trans colors. I’m not a fan of those stripes being added in a triangle on the side like an afterthought or someone trying to squeeze a missed letter in a word they just misspelled in pen. While I do not speak for the entire community, I want to say that I’m transgender, and I don’t like the trans colors added to the pride flag.

Lastly, adding the trans colors overtop the rainbow stripes now puts the trans identity on a pedestal of sorts. With this design, it is the only queer identity that is explicitly represented on a flag that is trying to represent the whole community. There is not a single sexual or romantic orientation specifically represented nor any other gender identities. I know the purpose of the triangle is to show the progress that the community has made, but that also leaves room for people of other identities to feel excluded because their colors aren’t on the flag that acts as an umbrella symbol. Adding the black and brown stripes isn’t nearly as concerning because they represent people of color, not a gender identity nor a sexual/romantic orientation

Will we keep adding to the triangle or other parts of the flag until all identities are represented on the queer pride flag? At that point, it would be much simpler to go back to the original rainbow pride flag and keep the black and brown stripes at the top. For those who feel like the rainbow flag has been perverted to mean something that excludes too many people in the community, I challenge you to create an entirely new flag that isn’t based on the eight-stripe, six-stripe, or Philly rainbow flags, since they are causing such controversy. For now, though, I believe that the Philly pride flag fits well as a general symbol for the queer community.

2 thoughts on “The New Pride Flag Design: Will It Catch On? Should It?”