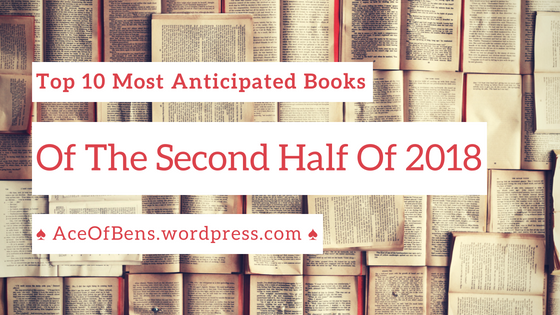 Yes, yes, I know it’s August so I’ve really missed the halfway point of the year, but July was a busy month for this blog. I made several updates about my Camp NaNoWriMo project, and my friend Paige and I started the Summer Blogger Promo Tour that will continue through the rest of this month. Between that and simply getting back into the habit of blogging, this post couldn’t quite squeeze into July.

So here it is now! A month into the second half of 2018, I’d like to share with all you lovely readers which books I’m most excited for that have yet to release this year. Below, I have the titles listed in order of release date. Let’s start!

When I was a kid, Disney’s The Little Mermaid was my absolute favorite movie. I mean, who doesn’t like mermaids? (And just look at the gorgeous art on that cover!) I haven’t quite dived into this recent new wave of retellings/fractured fairy tales as far I’d like to, so this should be a great introduction. Plus, this is more of a prequel or backstory to Hans Christian Andersen’s The Little Mermaid, so I can’t wait to see what Henning has thought up for this book. I have so many questions about this story that I need answered right now. To be honest, I just need this book right now! Plus it’ll be a good excuse to reread Andersen’s story and rewatch the movie…

A Touch Of Gold by Annie Sullivan (Aug 14)

As soon as I read the synopsis for this, I knew I would have to read this book! (Also look at this cover! So many beautiful covers!) King Midas is one of the most referenced characters from Greek mythology, yet I don’t see too many stories relating to his legend, much less about his family. I especially like this idea of the book being about his daughter and her legacy. Princess Kora has been a victim of her father’s golden touch leaving her skin permantly gold and burdening her with powers that she tries to hide away. (Not to be that guy, but I’m getting Elsa vibes from that part.) Now Princess Kora must use her secret powers so track down a thief. What more could I want from a fantasy book?

Darius the Great is Not Okay by Adib Khorram (Aug 28)

Obviously, I don’t relate directly to the representation in this book since I’m just a plain ol’ American, but there’s something about stories with main characters that struggle between two major identities that just hits home. Maybe it’s just the queer part of me that struggles with labels. Anyway, I like that the main character, Darius is going to Iran and meeting some of his extended family for the first time. Plus Sohrab, “the boy next door who changes everything”? Sign me the heck up. Just from the synopsis, he sounds like such a sweetheart. All of that plus own voices Iranian and depression representation puts this at the top of my tbr.

Okay, so don’t yell at me, but I haven’t read Starfish yet. However, I’m really excited for Summer Bird Blue. This is one of the books that I keep hearing about everywhere. So of course, I had to check out the book for myself, and when I did, the very first sentence of the synopsis resonated with me. “Rumi Seto spends a lot of time worrying she doesn’t have the answers to everything.” Oh boy, if that ain’t me. Although there was quite a bit of controversy over the rep in Bowman’s first book, a couple people whose opinions I trust have already read this book and say the anxiety rep is great. Which is amazing because I need more books in which I can see my anxious self.

One of my very good friends, Tay @ Stay On The Page, read this, and honestly, if Tay says it’s good, it must be good. I mean, just by looking at the authors that have written for it, I already have some high hopes for this anthology. Unbroken‘s release is pretty timely for me personally since I’m starting to come to terms with my own chronic illness and learning how to take care of myself. Also I heard it has representation for mental disabilies, not just physical disabilities, which is honestly what I’m most excited for. [Authors include William Alexander, Fox Benwell, Keah Brown, Dhonielle Clayton, Corrine Duyvis, Heidi Heilig, Kody Keplinger, Katherine Locke, Karuna Riazi, Francisco X. Stork, Kayla Whaley, and Kristine Wyllys]

If I’m being completely honest, I’ll read anything that says Anna-Marie McLemore’s name on it. But rather than talk about how amazing her other books are, I’ll talk about why I’m excited for this one. Rivaled sisters who are total opposites, two boys that get sucked into the danger because they don’t know how to mind their own business, a magical battle that will change their lives forever, even more queer representation, and a retelling of Snow White. What’s not to like about Blanca y Roja? Honestly, I would trade my soul to get an ARC of this book because I need it right now.

Do I even need to explain why I’m excited for this one? If you’ve been following book news at all this year, you’ll know that nearly everyone in the YA community is losing their minds over this book and it still has two months until it’s released. I mean, it’s a story about a meetcute between two very different boys whose paths cross briefly, almost insignificantly, then cross again when they least expect it. Not mention this book is coming from the authors of Simon vs. The Homosapien Agenda and More Happy Than Not. I think what I’m most excited for it how Albertalli and Silvera’s writing styles mix in this dual POV story, especially since Albertalli writes more fluffly light hearted stories that give you a break from real life and Silvera likes to rip your heart out and stomp on your emotions with his stories.

A Very Large Expanse of Sea by Tahereh Mafi (Oct 16)

I was only four years old when the tragedy of 9/11 happened, and I really know is that I was watching Blue’s Clues when is happened. So it didn’t really change my life the way it has others’. That’s part of why I’m interested to read a story about the political aftermath, especially a story that’s told from the perspective of a Muslim girl living in the United States at the time. I don’t think I could emotionally handle a story telling about the tragedy itself, like what happened on that day, so this seems like a good in between. Plus, I haven’t read nearly enough books with good Muslim rep in them.

When I first saw the title, I almost skipped over this book. It sounded too cliché for me. Like, is it really all that epic of a love story? But I’m glad I stop being picky and pretentious long enough to actually read the synposis because, oh boy, am I ready for this book. Nathan sounds just as cynical as I am, so I’m excited to read about his character. Based on the reviews of some lucky friends who’ve already read this, it’s a cute book with a happy ending which is something I need to read more of. I especially need more happy books with mlm main characters!

A book that takes place in space! At least partially. (Not to be that nerd, but I’m trying really hard not to make Voltron references/comparisons when talking about this book I haven’t even read yet.) You know, I usually have problems with media that takes place in space, either because it ends up being something I just don’t understand or because the dangers of space become a little too real and my anxiety spikes. However, the danger in this book sounds quite a bit more political than natural, which I’m always up for. What really brought me in is the concept of the misfit kids, or as the synopsis says, “Nax and his fellow failures” saving the day. (And again, look at the cover! I love it.)

Which 2018 books-yet-to-be-released are you excited to get your hands on?