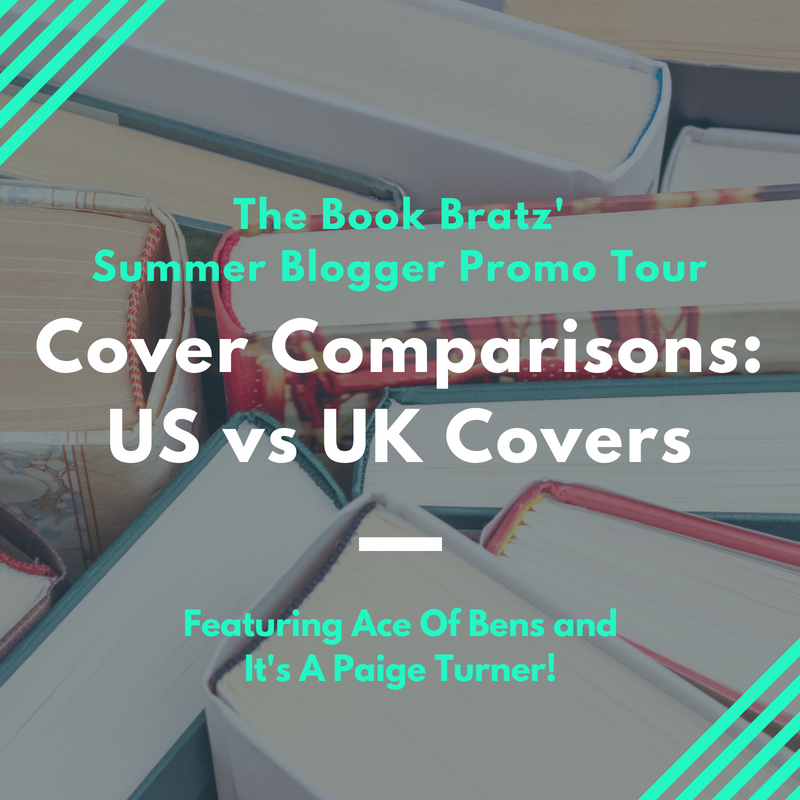 Welcome to another week of the Summer Blogger Promo Tour hosted by The Book Bratz! This week, my partner Paige and I are coming at you with some cover comparisons. We realized that book cover comparison posts are becoming a popular trend in the book blogger-verse, so we decided to make one of our own.

Below, we compare the covers of the United States and United Kingdom editions for nine books. For the sake of consistency, the US cover is on the left, and the UK cover is on the right. Without further ado, let’s compare!

A Darker Shade Of Magic by V.E. Schwab

The Hate U Give by Angie Thomas

Ben: While I like the minimalist feel of both covers, I’m not a huge fan of having real people’s faces on a book cover in general, so I definitely prefer the cartoonishness of the UStates cover. Also, the UKingdom cover is so much darker, and I don’t think the story is all that dark. Emotional, yes, but there is so much hopefulness in the narrative that I think the white background fits the story better.

Paige: I really like both of the covers for The Hate U Give for different reasons. I feel like the UK cover shows more emotion by having a real person’s face on the cover, which also feels more personal than the cartoon version of Starr on the US cover. On the other hand, I like how the white background of the US cover really pops. If you were looking at this book face-out on a shelf in a bookstore, your eyes would go right to it as you don’t see many books that have a similar color scheme. I also like that Starr is holding a sign that says “The Hate U Give” as this is very symbolic for the book. Regardless, I love this book and I love both of these covers.

The Raven Boys by Maggie Stiefvater

Ben: Overall, I like the UKingdom cover better. The one thing I don’t like about it is the font that the title is written in. It just doesn’t fit to me. Still, I like the focus being solely on the raven, whereas the UStates cover shows the four main male characters, even though the main main character is a girl. Where is Blue? I get it’s The Raven Boys, but why isn’t she on the cover when she’s the main character? That’s why I’m going with the UKingdom cover.

Paige: This is another close one, but I would say I prefer the UK cover. The focus on just the raven is more aesthetically than having the boys at the bottom. The UK cover also matches the rest of the series better because the other books don’t have faded images of characters on them.

An Ember In The Ashes by Sabaa Tahir

Paige: I have yet to read An Ember In The Ashes, so I’m not able to speak to how each cover represents the story. However, I would say that the UK version is prettier! I love the sparkly lights and it has a very magical feel to it.

More Happy Than Not by Adam Silvera

Ben: I was never a fan of the More Happy Than Not hardcover design. It definitely has something to do with my not liking yellow, and the texture of the background picture isn’t that pleasing to my eye. So when the UKingdom design dropped last month, I was so excited because I love that design! Now, if this were a comparison between the UStates paperback cover and the UKingdom cover, I’d have a much more difficult time choosing.

Paige: More Happy Than Not is another book on my “Must Read Asap” TBR, so I don’t know a whole lot about what this book is about. While I do think the UK cover is more aesthetically pleasing, I’m going to say that I prefer the US cover because, based on the other Adam Silvera book that I’ve read, I have a feeling that this is a more accurate representation of the story. That said, I still haven’t read it so I can’t say for sure!

Ben: This. Book. I’m not one of the lucky few who has read this yet, but from what I understand, it’s about two boys who meet by chance and then try to find each other again even though their paths aren’t naturally meant to cross again. So I like both covers. I like the UStates one because it shows Ben and Arthur going their separate ways but looking back at each other because they don’t want to leave. But I think I like the UKingdom cover better. I like the concept of the “I’m looking for this person, if you’ve seen them, take a strip and contact me” poster that’s shown. Plus it still has the drawn pictures of the characters! So I’m going with the UKingdom cover again.

Paige: I’m SUPER excited for this book to come out and for me it’s no question, I prefer the US cover. I could blow the US cover up and it could be a great piece of wall art. I love that the colours are soft and that you can see the outline of New York City in the background. The UK cover on the other hand feels a little bit juvenile.

Ben: I’m definitely more drawn to the UKingdom cover, but I think we’ve already established I like cartoonish designs best. Not to mention, the art looks a bit more organized whereas the vines on the UStates cover look like they’re just slapped on there. In all, the UStates cover feels plain, like it’s missing something, so I pick the UK cover.

Paige: I’m very on the fence with this one. The UK cover feels like it would be great if Heartless was a middle grade novel, but I also feel like I want more from the US cover. I’m going to say that I prefer the US cover, however I wanted more from both of these covers.

The Unexpected Everything by Morgan Matson

Ben: Again, I haven’t read the book, but it sounds like a fun, chaotic plot from the synopsis. So based off just the synopsis (this whole post is about judging books by their cover, so why not judge by the synopsis, too!), I think the UStates cover would fit better. There’s a bit more going on in that picture with more dogs and the ice cream truck, and it looks like more fun. Plus the UKingdom cover looks a little too posed. Obviously, there’s both posed, but there’s just something about the UKingdom cover that doesn’t really draw me in.

Paige: I love the US cover for this book! It has an ice cream truck, cute dogs and screams summer. The UK cover on the other hand feels like a subdued version of the US cover and it’s harder to read the author’s name. That said, I do like that the dogs are more close up than in the US cover!

This Savage Song by V.E. Schwab

Ben: Now that I’ve read ADSOM, I feel like I have to read all of Schwab’s books, this included. This is a simple comparison to me, because i love the warm colors on the uStates cover and that it has a musical instrument in the background. The UKingdom cover is too empty for my liking and if it’s about music, why not have something music related on the coverm

Paige: This Savage Song is another book that I need to read as soon as possible. The UK cover gives me a lot of Red Queen vibes with the contrast between the grey/white background and the red font. That said, I would say that I prefer the US cover, because it feels a little more unique. I also love the style of the font and how it contrasts with the red background.

So, the results are kind of backwards because Ben grew up with US covers and Paige grew up with UK covers, yet we each picked the opposite more. Maybe we’re just sick of our respective countries’ styles or maybe we like the fresh, new-to-us looks. Which covers do you all prefer?

Have a great day, guys, gals, and nonbinary pals!

2 thoughts on “SBPT – Cover Comparisons: US vs UK”