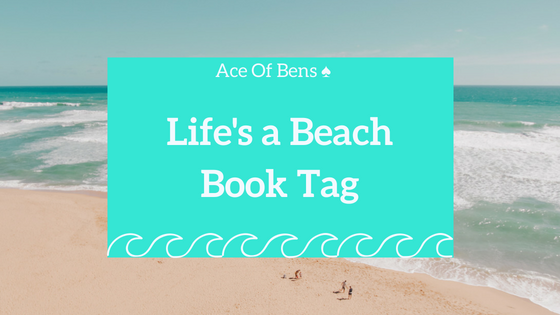 Since we’re really getting into the dog days of summer, and I’m coming to terms with the fact that I won’t be going to the beach this year, this tag felt appropriate. Creation credit goes to Lefty Reads!

1. The Sand – A book that stuck with you long after you finished reading

I talk about this book a lot because it was the first book with a queer main character that I’d ever read. When the sequel came out four years later, I reread it and loved it just as much. Rafe is a very relatable character and the story is one I can read a million times and not get bored of it.

A Mango-Shaped Space by Wendy Mass

Don’t get me wrong, this is a cute story of a girl navigating in middle school family, friendships, and first crushes. The catch is that Mia has synesthesia. I, too, have synesthesia, but I found it hard to relate to the book. To me, and many other synesthetes, synesthesia is just a thing that we have. Most people don’t even discover they have it until adulthood, but Mass treated the condition as a disease and a horrible thing that people need to learn how to live with. It just rubbed me the wrong way, because the only cases I’ve heard of synesthesia being a problem to people is when it causes sensory overload or mimics learning disabilities like dyslexia, but that’s not what the story is about. I definitely wouldn’t recommend it for the representation.

3. The Waves – A book that calms you down after a long day

So many people see this as such an emotional story, and really it is, but I get such a relaxed, summery vibe from it. It’s also one I’ll have to reread soon. Maybe this time I’ll listen to the audiobook. [Review here]

4. The Bathing Suit – A book with a pretty, summer-y cover

This One Summer by Mariko Tamaki and Jillian Tamaki

I know the cover is all blue and has a cold color scheme, but I mean, there’s water and they’re swimming, so it’s summery to me! Anyway, this is another book I’ve been meaning to read for a while.

5. The Birds – A book that is everywhere

Oh my gosh, ever since it was announced, people have not stopped talking about this book. The cover reveal and ARC giveaways at BookCon just amped it up, too. Unfortunately, I didn’t get an ARC so I’ll be listening to everyone gush about it until it comes out in October so I can read it.

6. The Company – A book with wonderful characters

The Hate U Give by Angie Thomas

Anyone who has read this book knows that Angie Thomas writes some of the best characters. I mean, Starr is really a star and I love her and all of her friends and everyone in her family. These are characters that don’t leave you when you put down the book.

7. The Ice-Cold Drinks – A book you absolutely gulped down

The Raven Cycle by Maggie Stiefvater

Even though there were flaws and some problematic aspects, I really loved this series. I connected with so many of the characters (Gansey, especially), and I loved the magical elements of the story. Once I started reading, I finished all four books rather quickly.

8. The Fun Memories – A book you can’t wait to return to

Percy Jackson and the Olympians by Rick Riordan

I think I’ve mentioned this before, but I bought the Spanish edition of The Lightning Thief, and I can’t wait until I have time to read it. Now that I know Spanish pretty well, I figured I’d start reading some books in Spanish, but I wanted to start with a book I’d already read in English. What better book to read than the Percy Jackson series, which I loved in middle school!

I’m ot tagging anyone, but feel free to take the questions from me if you’d like. That’s all for now, folks! Have a great day, guys, gals, and nonbinary pals!