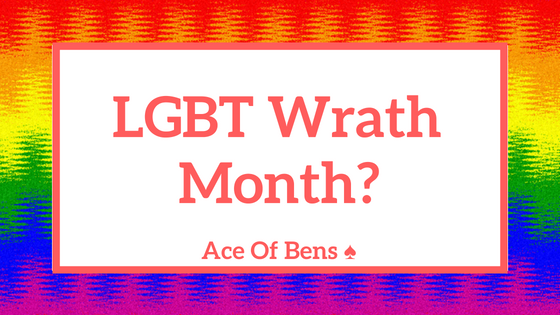 The best month of the year has ended. Yes, that’s right, Pride month is unfortunately over. Luckily that doesn’t mean that you have to fold your rainbow flags, hang up your bi shirts, and stuff all your pride gear back in the closet. (Unless, of course, you must do this for your safety. Stay safe, friends.) Pride is a year-round event that merely gets highlighted in June.

While it’s sad to know that for the next eleven months, people outside the community won’t find it as fun or necessary to celebrate our identities with us and lend their attention to our issues, there is a new LGBT month making its way into the community–LGBT Wrath month.

Pride month may be over but fear not!

Twitter user @SouthernHomo posted a tweet on the last day of Pride Month joking that each month of the year celebrates a different one of the seven deadly sins within the LGBT community. Of course, this tweet wasn’t meant to be taken seriously, but that hasn’t stopped people from declaring July LGBT Wrath month.

So in honor of LGBT Wrath month, I would like to share some things that I, a transgender person, am very angry about.

By now, everyone paying at least a tiny bit of attention to Hollywood headlines and/or queer issues has heard about Scarlett Johansson’s casting as a transgender man in an upcoming biopic. While she has very recently relinquished the role, I can’t say this is a win for the transgender community for several reasons. First being that we have no idea who they will cast in her place. It could be a trans actor, it could be a cis actor. That’s something we’ll have to wait and see about. Not to mention, Hollywood has a long history of casting cisgender actors in transgender roles (Elle Fanning, Jared Leto, Eddie Redmayne, etc., etc., etc.), and I do believe it’s at the point where this will be a hard “habit” for the industry to break.

2. Asexual And Aromantic people are not accepted in the community

The other argument I see all too often is “aces and aros are practically hetero.” But no, they’re not. Otherwise they wouldn’t identify as asexual and/or aromantic. The whole point of the queer community is that we accept those who don’t necessarily fit into the “I identify with the gender I was assigned at birth and am sexually and romantically attracted to only a different gender” life that society pushes onto us. That means that aces and aros belong in our community. Period.

3. The war between bi and pan identities

Why are there still intercommunity wars? Here’s a thought: Let people identify themselves with the label they are most comfortable with. The most frustrating part of this debate is that everyone seems to have their own definition of what these labels mean. While there is some variation between those in the community, most generally agree that since the prefix “pan-” means “all”, pansexual and panromantic people are attracted to all genders.

It’s a bit more complicated on the bisexual/biromantic side. Some say “bi means two” therefore bi people are only attracted to two genders (some go as far as saying that bi people only acknowledge two genders. As a not-so-binary trans person am here to tell you that I’m bi and that’s incorrect.) Some say bi people are attracted to their own gender and at least one other (which is where the “bi means two” aspect comes in.) Some say that “bi-” may linguistically signify “two”, but that the word’s usage over time has evolved to encompass more than attraction to just two identities.

4. Trans women erase lesbians apparently? Why are we humoring TERFs at pride events?

I just… I don’t understand, but I’m not sure I want to, so here’s an article explaining whatever they’re trying to pull this time. I add this to the list because we are somehow still giving trans-exclusionary radical feminists a platform to spread their hate. Even worse, we’re letting them do this at events and in places where the rest of us are trying to show pride and acceptance of all identities. I have no solution to this other than to use the block button on social media and be careful which groups you invite to pride events.

5. The fact that we’re humoring a 4chan meme campaign about pedophiles for page clicks

Have you seen that pedophilia pride flag going around social media? Hopefully not. I won’t link to it because I don’t want to humor them. Anyway, that whole movement to include pedophiles in the queer community was started by trolls on the toxic website that is 4cha+n. Yet several news sites have reported on it, which is giving the movement traction across other social media and humoring the idea. We as a society, not as the queer community, but as a society, need to learn not to take anything from 4chan seriously. Let’s make a pact to ignore that entire website.

6. Transitioning costs so much money

Listen, you can tell me I’m “man enough” all you want and say things like, “What? No! You pass,” and “You’re very masculine, don’t worry.” That’s unfortunately not enough. One day, I want to start transitioning, but for now, I am a broke, transgender, college student. Now, I don’t want to go into the details of how I want to transition on the internet, but just know that if I want a certain surgery, it will cost around $9,000 and time off of work and school to recover. Not to mention that hormone replacement therapy will be a monthly expense for the rest of my life, and not all insurance providers cover it. I am trans and I am angry that I don’t sound or look like a man. That is all.

Now that I have all that out of my system, I want to hear from others in the LGBTQ+ community. What are you angry about this wrath month?