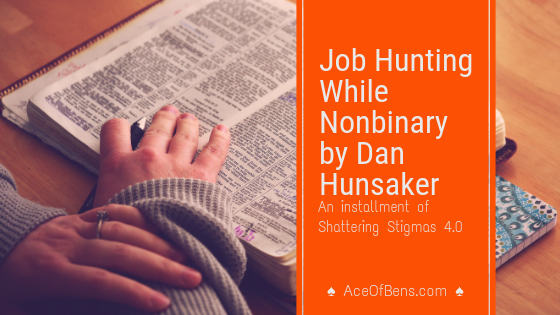 Most folks I’ve talked to, even those without mental health concerns, experience some amount of stress over searching for work. Tracking down a new employer takes a significant amount of time, effort, and often rejection. The general consensus seems to be, among my tiny sample size as much as popular entertainment, that job hunting is a stressful activity most folks would much rather avoid. So why not add a bunch of extra stress factors to the mix?

Hi! My name is Dan! I’m a nonbinary (genderfluid demimale, when pressed; they/them pronouns please) diamoric-pansexual polyamorous person who has spent the last two months (give or take a handful of days, depending on when this goes live) searching for work as a senior software developer. I have a lot of privilege, as a white person, assigned male at birth (AMAB), generally assumed heterosexual, who also happens to have a skill generally worth six figures of annual income. I’m still working through a lot of that stuff. At the same time, I’m also not actually male, nor am I hetero, and people’s behaviors change when they learn those things about me. Add to that the fact I’m almost certainly autistic (I haven’t been diagnosed with anything, but I have yet to meet an autistic person who hasn’t said that I am, too), and then layer in the anxiety, depression, and paranoia I actively fight on a daily basis… Life is hard even with the free hands-up I have access to.

“Isn’t this supposed to be a Shattering Stigmas post?” I can hear some folks ask. Sure is, and I’m about to dive right into all that. I just felt it was important to give folks an idea of who I am before I jump in, some context to my life and experiences, and where some of the differences in how I experience life may come from. I can’t and won’t claim to explore how everyone experiences job hunting or the myriad ways my mental illnesses (and aspects of my life only recently recognized as not being illnesses at all) manifest. But I can and will give my own, and be one voice among the sea of others joining in on this experience.

My job search started out, this time, much like all my others. I put out feelers, and had already been offered an opportunity with an employer who seemed likely to be a good fit, so I was pretty confident I’d be employed again within a week, maybe two. That one didn’t pan out, so I started looking around some more. I have a strong desire to stay near my children, so I can still spend time with them, and as I don’t live with them or their mother, simply taking them with isn’t really an option. So I’ve been looking for something local, or preferably remote. (I travel somewhat frequently for various reasons I won’t get into here, so being remote is a major advantage.) Two more positions came up, and I applied for those, but both ended up rejecting my application because the US Federal Government doesn’t substitute experience for degrees, even in a field like mine which is moving so fast that a degree is more often a disservice, because everything you know is out of date and has to be re-trained out of you.

Further applications are in various states of applied, interviewed, and rejected without explanation (“we’ve decided not to move forward” is a phrase I have grown to hate). I’m still between employers. If it wasn’t for a small amount of freelance work I’ve managed to maintain in the meantime, I’d probably be homeless right now. I’ve been lucky, and my privilege has doubtless helped in ways I have yet to fathom.

But let’s get into some of the nitty-gritty of how I was doing through this time. Most of the applications I’ve filled out have an Equal Opportunity Act section, to collect data that HR can use to keep track of workplace diversity, without necessarily (or even legally) being attached to the applicant themselves. In this section are the basic questions about Gender (sometimes called Sex), Race, Disability, and usually Veteran status. I quite easily and willingly answered Race with “White (not Hispanic)”, Disabled as “Yes” (mental illnesses and autism count, for this one), and Veteran status, when asked, as “Protected Veteran” (I was in the Navy and participated in OIF, so there are additional laws protecting my employment status as a result). But every single time, the Gender question made me hesitate. Only three options: “Male”, “Female”, and “Decline to State”. I’m not male, and I’m not female, but I also wanted to actually answer this question. It’s technically a legal document, so answering untruthfully is a serious offense, which made answering “Male” even more uncomfortable than the unspoken insistence that I don’t actually exist since I’m not either option.

I chose “Decline to State” on all of them. I didn’t want to skip answering these questions, but none of the actual answers are correct, so I couldn’t use them. And my entire mental state would spiral from there. If you’ve never had your very existence denied before, this may not make much sense to you. But every time I had to answer “Decline to State”, I felt as though I was denying my own existence, admitting that my gender must be something entirely made up, and I’m just claiming nonbinary so I can feel more like I belong in the queer community, and on and on and on doubting myself and everything I know about everything. This experience stands out in my mind, since I had to relive it so many times.

Here’s where any autism I have comes in. Looking at the experience, even while I’m actually having it, I can see that it’s my anxiety giving extra power to the assertions that I’m making things up to belong somewhere. I can see that my depression reinforces the negative feelings until I no longer have the desire to fight them, and eventually no longer have the energy to even acknowledge them. I can see that my paranoia is taking an official form and turning it from casually transphobic (denying we even exist is pretty classic textbook transphobia) to personally targeted at me. I can see that my mental illnesses are compounding something merely insensitive into an existential crisis. Unfortunately, knowing this, even in the moment, doesn’t really help me do anything about it.

So let’s talk about the rejections, then. If not being included on the Gender section of the EO form can send me into a spiral, how does being actually rejected from a position affect me? A couple of them were actually not so bad. Specifically, the two positions where the Feds’ degree stubbornness disqualified me. It was very clear that the degree thing was the only reason I wasn’t being forwarded up the hiring chain on the spot, both times. The second time I was even actually expecting it. So neither time felt like I was being rejected over something actually part of who I am. (Yes, I don’t have a college degree, even at age 32 and with full GI benefits covering the tuition. As noted above, getting a degree can actually hurt my employability, given all the outdated info still being taught, so this isn’t something I consider a personal failing, nor even actually a problem.) So what about the others, then?

The first position I applied to, where the company had actually reached out to me initially, ended up going with someone internal. This happens. It was disappointing, and I suddenly started to feel the stress of not having a backup plan already in motion, but it wasn’t all that personal, either. After the federal jobs didn’t pan out, then, I applied several other places. The ones who’ve responded at all, so far, have rejected me without explanation. Just “not moving forward”. Since I have no idea what caused them to skip me over, I have no idea whether it was something about me, or something about someone else they liked better. Enter paranoia: the rejection is because of me, who I am as a person, something I’ve said on my social media, groups I’m part of, or something else tied directly to me. This gets anxiety involved: yeah, they’re right to do it, too; I’m not worth hiring, not worth the amount of money I’m asking for, not worth anything at all, I’m a terrible human being who can’t even get a job in a field with tons of openings, etc. Depression reinforces the negative, drains any energy I have to resist. Autism points out that nearly all of this is speculation, at best, and full of logical fallacies. Anxiety latches on to that, too: I’m so bad at life I can’t even prevent myself from overthinking and overreacting and spiraling into the abyss. And on it goes.

Of course, the applications where I’ve gotten no response at all are probably the worst. Should I even expect a response in the first place? Am I being considered, still, or have I already been discarded? There’s not usually a way to follow up with most of these applications, and intentionally so. But the constant feeling of being on edge, never knowing if I’m a day or a year from a response, adds more stress on to the mental illnesses I’m already fighting with. It’s been a struggle, and I don’t look forward to doing it again, someday.

There’s a happy-ish ending to this one, though. Thanks to some very concerned friends (and an experience where I nearly jumped in front of a moving vehicle), I’ve got some medication that helps offset some of the anxiety and depression. And thanks to the VA providing me health coverage, I’m on hormone therapy to help my body more closely reflect my actual gender (which is somewhere in between the options presented on the Equal Opportunity forms, when there’s a gender there at all). The suppression of testosterone has – for me – really helped things calm down and stay manageable. Seeing a counselor on a regular basis is also helping a lot. I have a good support system of folks who care about me (most of them Found Family). I’m making it through. I’ve been lucky. I hope I continue to be lucky for a long time to come.

Dan can be found scattered around various parts of the Internet, sometimes under a pseudonym. Their blog is at danhunsaker.awswan.com, and has links to their Patreon, GitHub, and a handful of social media accounts. They talk about writing software (and prose!), mental illness, and being queer, sometimes all at once. Oh, and also their kids. They’re super fond of their kids.