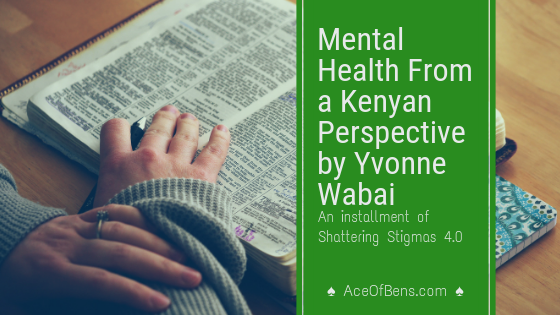 This year, it was reported that the rate of suicide in Kenya had hit a ten-year high, rising by 58% between 2008 and 2017. Depression has been pinpointed as the cause of the 7000 yearly suicides in Kenya. Looking at the news, it’s not hard to tell that things are obviously not going well. It seems like every single day, there are reports of death by suicide on the news. The most recent case was actually yesterday – 28th September – and it involved a young man who hanged himself due to performing poorly in school. The young man had mentioned to his pastor that he was suicidal and he had described the reason he was underperforming in school as poor relations with his parents. The pastor had supposedly talked with the young man’s parents, but it was all too late.

According to the World Health Organization, close to 800,000 people die by suicide every year, making that about one person every 40 seconds. 75% of these 800,000 people come from lower and middle-income countries. The stigma associated with mental health is pretty much a worldwide phenomenon, so why then are lower and middle-income countries more at risk?

In Kenya, for example, there simply aren’t enough resources dedicated to mental health. Lower and middle-income countries usually have a lot on their plate already that mental health is pushed to the backburner, which is a sad situation because mental health is important. In my 22 years of living here, I can only name one, one public hospital that deals with psychiatric cases, and the reputation that hospital has gathered isn’t good. Despite the fact that it is estimated that 1 in 4 Kenyans is likely to suffer from mental illnesses in their lifetime, the country only has 88 psychiatrists and 427 nurses qualified to handle the illnesses in the 14 mental health hospitals which have a bed capacity of between 15 and 25, a fact I had previously raised here. To put that into context, Kenya’s population is roughly fifty million. That doctor-patient ratio is way off.

In 2018, a report by the Kenya National Bureau of Statistics showed that men are more likely to die by suicide than women. The same report also showed that Kenya was ranked sixth-highest in Africa in the number of depression cases. Young people are the ones most affected. Globally, suicide is the second-leading cause of death amongst 15-29 year olds and that is mirrored in Kenya as well. It is estimated that there are 19.2 suicides per 100,000 males and 5.6 suicides per 100,000 females for Kenyans between the ages of 15-24, depression once again being the highest cause. Also blamed for the increase in suicide rates is alcohol and drug abuse, bad parenting, high unemployment rates, and domestic and sexual abuse.

Even though a rise in suicide rates is not a good thing, a good thing has come out of it. I don’t like saying that though, because why should a bad thing have to happen for a good thing to come out of it? Do people really have to die for the world to take mental health seriously? But, apparently, that is how the world is. And, now that things are not looking up, people have started listening. More and more people have started talking about mental health. More and more events like Shattering Stigmas have come up. In the recent months, more and more people from Kenya have been highlighting mental health issues. There was a time when, in many places in the world, including here, talking about mental illnesses was taboo, but now, people talk about them more freely. There are people blogging about mental illnesses. There are people blogging about self-care. There are free counselling services offered in schools, universities, and even workplaces.

That said, there is still a lot left to do. We need more mental health professionals. We also need suitable government policies – both in writing and in practice – dealing with mental health because government policies are the foundation of pretty much all areas of our lives: school, work, hospital, home… If your government doesn’t recognize you, then insurance companies won’t recognize you either, and neither will employers, banks, schools, etc. And you’re going to have a very hard time if the society you’re living in doesn’t recognize your existence. This is why government policies are important. For example, insurance companies don’t usually cover medication for the purpose of mental illness. You can get medicines used for depression, for example, but for purposes other than depression. That is most probably covered. But as soon as they see ‘depression’ as the reason for the prescription, you’re going to have to buy that out of your own pocket. And most of these medicines are very expensive, and people have even gone broke buying them because their insurance wouldn’t cover their mental health prescriptions.

Also necessary is to shatter the stigma. Even though we talk about mental health more freely now, there is still a sense of shame that people admit to feeling when they get that mental illness diagnosis. There is still that hesitation in admitting, “Hey, I have X mental illness.” People still look at people who have mental illnesses weirdly. People still pill-shame people with mental illnesses who choose to take medicines. People still think that if you jump around outside or take a walk in the middle of some trees, you’ll magically be cured of mental illness. People still think that the key to mental health is eating vegetables and drinking water and that’s it. Um, okay, Susan, not to be crass, but do you really think I’ve been drinking piss and eating cardboard all this time? Some of these people are probably trying to be helpful, albeit failing miserably, but let’s face it, intention doesn’t trump effect. The effect is stigma. Stigma prevents people from seeking professional help. Stigma prevents people from reaching out to their friends and family. Stigma makes people feel hopeless, helpless, and all alone. It is high time we end the stigma. Stigmatizing illnesses helps neither the patient nor the society.

Yvonne Wabai is a young Kenyan writer and scientist. You can find more from her here: